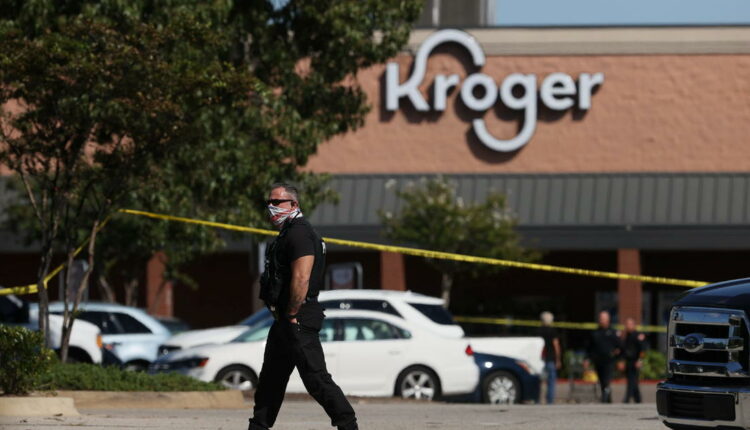 As a result of the training, local fire and police departments were more integrated and therefore able to respond quickly to the scene and the victims, Lane said.

No officers were injured in the shooting.

Investigators are working to determine whether workplace violence was a factor in the Kroger shooting, two law enforcement sources told CBS News.

The investigators are looking into whether the deceased shooter may have been a disgruntled employee, the sources said. The situation is fluid and changing. The sources said there does not appear to be a connection to terrorism.

5:43 PM / September 23, 2021
Kroger is “deeply saddened” by the shooting and “cooperating with local law enforcement”

“We are deeply saddened by the incident that occurred at our Kroger store located on New Byhalia Rd. in Collierville, TN – a suburb of Memphis. The entire Kroger family offers our thoughts, prayers and support to the individuals and families of the victims during this difficult time.

We are cooperating with local law enforcement, who have secured the store and parking lot. The store will remain closed while the police investigation continues, and we have initiated counseling services for our associates. To protect the integrity of the ongoing investigation, we are referring questions to the Collierville Police Department.”

Tennessee Senators Bill Hagerty and Marsha Blackburn are sharing support for the victims on Twitter.

Tragic news out of Collierville, TN, that I’m closely monitoring. I’m grateful to law enforcement & first responders for their heroic actions. Chrissy & I are praying for the victims & this TN community that is hurting. My office is available to anyone needing assistance.

Our office has been in contact with ATF, TBI, and local authorities on the ground, and we are closely monitoring the situation in Collierville. We are praying for all of the victims.

5:09 PM / September 23, 2021
“It sounded like a balloon popping”: Kroger employee who was inside the store speaks out

A woman who was working at a register inside the Kroger said she never would have believed this would happen at the place where she works.

Dickerson, who commutes from Mississippi, said a man opened fire as soon as he walked into the front of the store. She said she did not get a good look at the shooter, saying she wanted to play dead. Police have not released any details about the shooter’s identity.

One of her coworkers, she said, was shot in the head. He was alert and asked her to call his mother.

Dickerson said she led a group of people to the back of the store to hide.

“It seemed like I never believed it would happen here where I work,” she said, describing the Tennessee town as “beautiful,” “peaceful,” religious and diverse.

Police Chief Dale Lane said they received a call about an active shooter at the Kroger store at 1:30 p.m. Thursday afternoon.

The first officers arrived at the scene at 1:34 p.m. They went from aisle to aisle and room to room to clear the building. In doing so, they brought several employees out from hiding and helped those who were injured, Lane said.

The FBI is at the shooting scene and assisting local police with the investigation, an FBI official told CBS News. The Collierville Police Department is the lead investigative agency.

In the past, the FBI has done evidence collection and processing, but it’s unclear what role the bureau will be in this shooting.

Police believe the shooter’s vehicle is in the Kroger parking lot, but officials are waiting for more machinery so they can safely inspect the vehicle, said Chief Dale Lane. “This scene is horrific. I’ve been involved in this for 34 years and never seen anything like it,” Lane said.

Authorities are expected to provide another update around 7 p.m. ET.

Emergency personnel respond to a shooting at a Kroger supermarket in suburban Memphis, Tennessee, on September 23, 2021.

At least one person died and 12 people were injured in the shooting, according to Chief Dale Lane of the Collierville Police Department. Many of the injuries were severe, Lane added.

No other information about the victims has been released.

Students at Collierville High School are sheltering in place as authorities respond to the reported shooting, CBS affiliate WREG-TV reported.

Students cannot leave the building and no visitors are allowed to enter the building, WREG-TV reported.