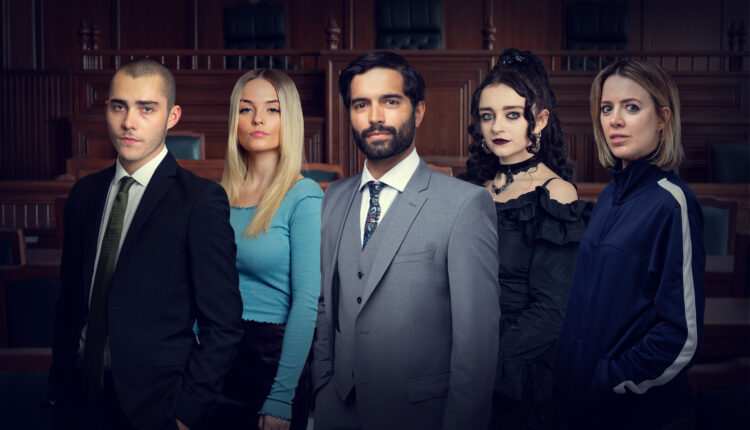 Nina Lucas (Mollie Gallagher) and Seb Franklin (Harry Visinoni) were subjected to a brutal unprovoked attack carried out by Corey Brent (Maximus Evans) and his drunken gang in Coronation Street.

They were rushed to hospital, and the doctors and nurses did all they could to try and save them.

However, as Seb’s injuries were so severe, he died in hospital.

Since then, life has changed for many in Weatherfield. Nina has self-destructed, consumed with guilt and became convinced her goth sub-culture was the reason for the attack.

As well as suffering from memory loss, Nina has also changed how she looks. She’s changed her clothes, hair and removed the makeup she loved to wear so much.

Seb’s murder trial is set to be a dramatic few weeks in Coronation Street.

So, what’s going on? The trial begins soon, and here’s what you need to know:

Nina has flashbacks before she stands trial

Before the trial, Nina will be transported back to the last day of Seb’s life.

With Abi (Sally Carman) helping, Nina will be struck by the sight of a plastic heart ring, the present Seb gave her before their attack.

Retracing her steps, Nina is joined by Abi, Summer (Harriet Bibby), Asha (Tanisha Gorey) and Aadi (Adam Hussain) as they head back to the industrial land.

In a series of specially shot scenes, the audience will be taken back to the night of the attack as viewers discover what really happened on the night of Seb’s death.

Will Nina readopt her goth look?

She’s been living a life that’s seen her conform to society, but as Nina grows determined to see Corey sent down, she’s urged to readopt her goth identity as no one deserves to be persecuted for the way they look.

Will Nina change back into her goth attire?

As her recollection of the horrific evening comes to an end, Nina vows to go to the police to tell them everything.

But in court, Nina is cross-examined by Sabeen.

Nina’s nerves will increase when a confident Sabeen questions the reconstruction and does her best to discredit her friends.

Sabeen is prepared to save Corey, but will Nina keep control?

Corey manipulates to save himself

In his prison cell ahead of the trial, Corey recalls the aftermath of the attack.

As the trial gets underway, he lies through his teeth, painting himself as the victim and tells the court that Kelly’s (Millie Gibson) dad is a gangster and she threatened to have him killed.

He’s done all that he can to ensure he’s the innocent party pre-trial, but if the pressure gets to Corey, can he really walk away scot-free?

Imran and Sabeen go to war

As Sabeen continues to question Nina, she loses her temper, which leaves Imran worried.

On the opposing side, Imran is prepared to save Kelly from a murder charge and as Corey takes to the stand, Imran will cross examine him and suggests he was the one who killed Seb.

When Yasmeen’s (Shelley King) court ordeal took place, Imran delivered a powerful speech that saw Geoff (Ian Bartholomew) crack, can he do the same with Corey?

The pressure gets to Asha

Viewers will remember Asha found herself caught in the middle in the moments after the attack.

As she enters the witness box, Asha explains that Corey bullied her into lying to the police.

But with Sabeen knowing everything about the people in the witness box, she’ll question whether Asha is still in love with Nina – will her response impact the overall result?

When Imran questions Asha, he crosses a line and suggests Seb was murdered because he got in the way and Corey was in fact targeting Nina out of jealousy as Asha was in love with her and not him.

Horrified at the implication it was her fault, Asha will break down in Dev’s (Jimmi Harkishin) arms.

Will Abi’s anger be a help or hindrance?

Apprehensive and desperate for the right result, Abi’s involvement in court could impact the result hugely.

As Seb’s final voicemail is played, Kelly hangs her head in shame as she hears her voice on the record.

Outside court, Abi rails at Stefan (Paul Opacic) and tells him it’s time his son started telling the truth.

After further questioning, Abi takes a break outside court but when she spots Stefan again, she launches a verbal attack, accusing him of trying to buy Corey’s innocence with bribes.

As Abi searches Stefan’s social media accounts, will she find any proof?

Eli, the person who egged Kelly into slapping Nina on the night of the attack, will make a return soon as he too is questioned by Imran and Sabeen.

Imran will suggest that Eli isn’t telling the truth in order to get a reduced sentence, but how will he respond?

Will Eli tell the courts how much involvement he had on the night of the attack?

Kelly will reveal that Laura has offered to give evidence and explains she stopped her from going to the police straight away.

Imran’s unsure, aware Laura could be a liability.

Given the fact that Laura recently attempted to sell Kelly’s story to a newspaper outlet, what evidence will she have for the court?

Could it impact how Kelly’s future plays out?

We’re aware Tommy Orpington has a few connections with Corey, and he will do all he can to give the teen a glowing character reference, but is there a secret reason behind Tommy choosing to support Corey?

We know Abi will accuse Stefan of trying to buy Corey’s innocence with bribes, could he have bribed Tommy?

So many questions, so many spoilers, but not a lot of answers – yet.

Will Corey be sent down?

If Corey and his team win the trial, what will that mean for Imran, who’s put his heart and soul into trying to save Kelly and getting justice for Seb?