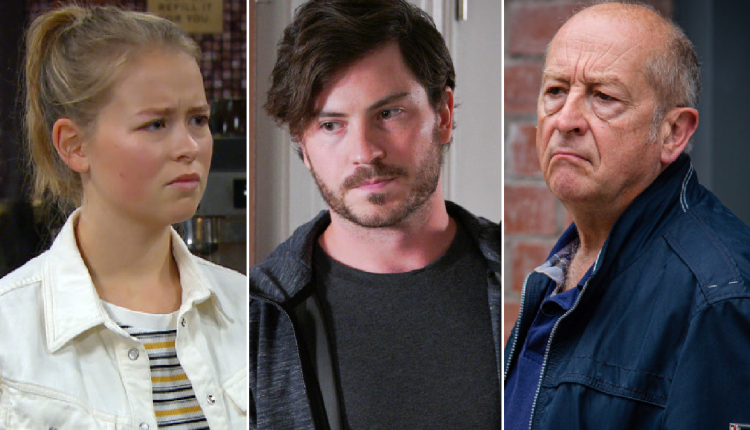 The soaps are well and truly back up and running as we head into the autumn, and the first week of October is certainly set to be an eventful one in EastEnders, Coronation Street, Emmerdale and Hollyoaks!

Meanwhile, Aaron Dingle (Danny Miller) receives quite the shock in the form of an unexpected letter in Emmerdale, and Toby Faroe (Bobby Gordon) is out for revenge on sibling Mitchell Drinkwell-Deveraux (Imran Adam) in Hollyoaks.

It’s a huge week in all four soaps, and if you fancy a sneak peak of what’s to come, have a butchers below!

Linda takes a drink in EastEnders

Mick works behind the bar at The Prince Albert for Frankie’s big Drag Bingo night. Therefore, Linda, Max and Sharon all team up. Linda becomes fed up of Mick constantly looking over her shoulder, and she ultimately has a moment of weakness, as she takes a sip of an alcoholic drink — but little does she know that Max has caught her!

Geoff’s interest is piqued when he spots Nicky in the cafe giving Daniel some money back saying she didn’t need it all. At the police station, Daniel soon cracks and admits he gave Geoff’s money to Nicky. Later, the police arrive at No.6 to inform Geoff of Daniel’s confession and willingness to repay the money. However, Geoff insists he wants Daniel punished.

Chas bonds with Al in Emmerdale

In the Zen gardens, Chas finds herself distracted when she spots Al, who’s doing a good job of trying to hide from Rishi behind a bush!The pair end up flirting as they talk about each other’s partners, and it becomes apparent that Chas enjoyed herself afterwards.

One to watch: Wednesday September 30 at 7pm on ITV.

Toby isn’t pleased when he discovers that some pages from The Red Door book have gone missing. but he later spots said pages in Mitchell’s bag. Toby therefore invites Mitchell to meet up in private so he can explain his side of the story, but it appears as if he’s got more sinister intentions for his sibling.

Stuart couldn’t be more excited to say ‘I Do’ to the woman of his dreams, but Rainie encounters a bit of a problem when there is a mix up over her dress — something which she’s not too pleased about! However, that’s the least of their worries, as Stuart waits in the hearse, and an electrical fault occurs — trapping him in the vehicle.

After receiving his sales bonus, Michael purchases an engagement ring, and gets down on one knee — popping the question to Grace. However, Grace declines his proposal, revealing that she and Tianna are off to Spain .Michael fears that he’ll lose Tianna forever, and he seemingly kidnaps her. Ed locates them in Victoria Gardens, but when they return home, the police question him.

Aaron prepares to go on a kayaking session with Ben, but he soon finds himself distracted, as he opens a letter addressed to him — and the contents of said letter leave him in shock.

One to watch: Thursday October 1 at 8pm on ITV.

Felix’s interest is piqued in Hollyoaks

Having overheard an argument between Celeste and Toby, Felix is determined to find out what it is that Toby has done.

One to watch: Wednesday September 30 at 7pm on E4.

Gray argues that Mitch made his life a living hell, and that he tried to turn Chantelle against him, before calling him a terrible father.

Nick comes face-to-face with Sam, and the pair attempt to bond. It soon comes to light that Sam has a passion astronomy.