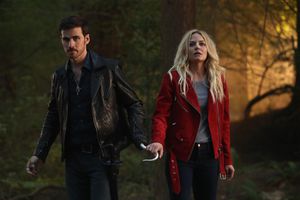 11 best TV shows to watch on Disney Plus

If you’ve binged The Mandalorian and are on the hunt for your next big Disney Plus addiction, here are a few live-action gems to check out.

Comedies like Lizzie McGuire are a must, along with more from the sci-fi, superhero world, including Marvel’s Agent Carter and lesser-known gem So Weird.

Subscribe to the CNET Now newsletter for our editors’ picks of the most important stories of the day.

Let’s round up the best live-action shows Disney has to offer.

Read more: Excellent! Bill & Ted Face the Music is now available to rent or buy at home. Here’s how to watch it

Once Upon a Time

If you’re into fairy tales reimagined for a modern day setting, Once Upon a Time is a long-running series covering a huge range of classics. And Frozen! Set in a seaside town with a forest not far away, the story follows Emma Swan and her 10-year-old son. They encounter magical objects, like a Narnia-repping wardrobe, and live-action characters like Snow White, Prince Charming and the Evil Queen, who were transported to the real world. It’s up to Emma to help them break a curse that stole their memories. Charming, grab-your-tea-and-a-blanket stuff.

Criminally short at two seasons, Marvel’s Agent Carter gave the whip-smart Peggy Carter a chance to showcase her action-hero side. Set after her love Steve Rogers sacrifices himself at the end of Captain America: The First Avenger, the series focuses on Peggy’s adventurous life in 1940s New York, where she takes on a slightly dangerous gig helping out genius scientist Howard Stark and his butler Jarvis. Hayley Atwell channels a sense of cheeky fun in this stylish Marvel TV gem.

Sliding sweet nostalgia across the table, this late ’90s sitcom also stars one of the coolest, cutest child actors. Tahj Mowry plays boy genius T.J. Henderson, managing to pull off being a likeable know-it-all. Aside from the comedy, T.J.’s heart-to-hearts with his single dad are tear-jerking. It’s a little dated, but it’s one of the best sitcoms starring a young Black actor.

Six super-powered teens team up to fight against their criminal parents — that’s the intriguing premise of Marvel’s Runaways. Eventually the team does some running, escaping their parents as well as Morgan le Fay and other villains. Despite its occasional reliance on standard superhero storytelling, this strong ensemble will grow on you, along with the wider Marvel Cinematic Universe references and general exciting action. If you’re a fan of the comics, you’ll be satisfied.

If you missed this classic sitcom in the early ’90s, it’s time to hit it up on Disney Plus. Chronicling the life of middle schooler Cory Matthews, Boy Meets World ran for seven seasons, depicting realistic characters and relationships that branch and blossom into lessons about real life. For a nuanced sitcom that features some of the best ’90s curtained hairstyles, Boy Meets World is a must.

The show that launched Baby Yoda into the pop culture stratosphere built its foundations on a base of bountiful action and rich space Western visuals. The titular lone bounty hunter finds his soft side as he protects his precious green alien baby from those on his tail. For polished episodic storytelling in the Star Wars universe, The Mandalorian is bang on.

This Disney Channel classic might be coming back for a sequel series, but in the meantime enjoy the original wholesome misadventures of teenager Lizzie McGuire and her friends Miranda and Gordo. With creative soliloquies from a cartoon version of Lizzie, the show allows you to peek inside its hero’s brain as she finds her identity and grows up.

If its shaky first season lost you, it might be time to give Agents of S.H.I.E.L.D. another go on Disney Plus (available in the UK and Australia; arriving after August for the US). Finding its feet by the second season and growing from there, the series is character-focused storytelling set in the Marvel Cinematic Universe and cocreated by Joss Whedon. A super cast, including Clark Gregg and Chloe Bennett, take on S.H.I.E.L.D.’s enemies, from Hydra to the Kree.

See where it all began for Shia LaBeouf in Even Stevens. The comedy hinges on the dynamic between siblings Louis (LaBeouf) and Ren (Christy Carlson Romano): Louis is the carefree mischief maker; Ren the A-grade overachiever. Delivered with superb comic timing, this is quintessential family comedy that lets you marvel at LaBeouf’s natural talent in front of the camera.

A Disney Channel show with The X-Files comparisons? This late-’90s gem is definitely worth checking out. So Weird stands apart from other Disney Channel shows of the time with its dark tone and intricate narrative. It follows teenager Fiona as she tours with her rock-star mom and encounters paranormal activity on the way. With original music and a cult following, So Weird should be on your radar.

51 of the best TV shows to watch on Netflix

Tenet: That ending explained and all your questions answered