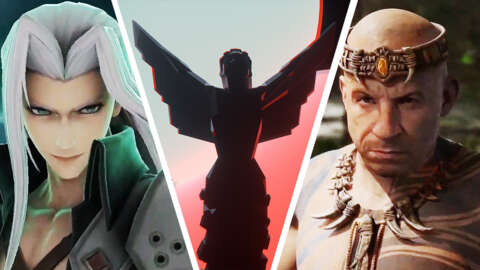 12 Biggest Trailers From The Game Awards 2020

Watch some of the best trailers and game reveals that came out of The Game Awards 2020, including a new Mass Effect, a teaser for Dragon Age 4, the return of Perfect Dark, and more.

Alongside a celebration of 2020’s best video games, The Game Awards was packed with new trailers and world premieres for upcoming titles.

If you didn’t sit through the entire three-hour long show but still want to catch the big announcements from the event, we’ve got you covered with this round-up of the 12 biggest trailers from The Game Awards 2020. The compilation features the surprise reveal of Perfect Dark, the first game from Microsoft’s “AAAA studio.” The Initiative is helmed by talent from Crystal Dynamics, Naughty Dog, Bungie, and more. We also included two teasers from Bioware: one for the next Dragon Age, featuring everyone’s favorite egg, Solas, as well as a glimpse at the next Mass Effect. We also had to include Sepiroth’s introduction video to Smash Bros. Ultimate, featuring that now-iconic image of him and Mario, as well as Ark 2, starring Vin Diesel.

If you want to catch the full Game Awards replay, check it out on youtube.com/GameSpot, and subscribe for all the latest and hottest game trailers.

Best of CES 2021: The most intriguing and innovative PC hardware