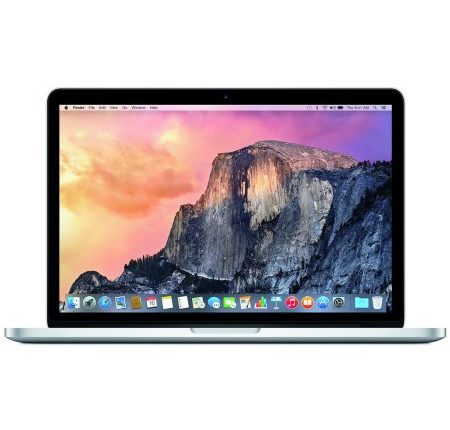 The highest-end laptop in Apple’s laptop portfolio is now even higher-end. The new 15-inch MacBook Pro ($1,789 at Amazon Marketplace) with Touch Bar features a processor upgrade — Intel’s eighth-gen six-core CPU — but sticks with the same $2,799 entry-level price as last year’s model. The new premium configuration, which includes a 2.9GHz Core i9, 4TB of SSD storage and 32GB of DDR4 memory, will set you back a whopping $6,699.

Aesthetically, the 2018 MacBook Pro is virtually identical to the version it replaces — same design and color options. All of the changes are on the inside; here’s a rundown of all of the new and improved specs:

Modest tweaks to the super-flat butterfly keyboard intended to quiet key clack (but not to resolve dust-related issues).

Apple has also released a new version of the $1,799 13-inch MacBook Pro, with a similar batch of incrementally upgraded components. You can still buy a 13-inch MacBook Pro without the Touch Bar, a solid value starting at $1,299, but Apple has discontinued the 15-inch 2015 MacBook Pro model — the last of the Pros to come equipped with USB-A, HDMI and a Mini Display Port connection. It’s all USB-C now, baby.  (See the chart below for UK and Australian price info.)

Otherwise, the remainder of the Mac portfolio remains unchanged. The rumors suggest that Apple may update the rest of the lineup — the 12-inch MacBooks ($1,289 at Amazon.com), the iMacs ($1,799 at Amazon.com) and the aging MacBook Air — before the end of 2018. Of course, that’s completely unofficial; the company hasn’t announced anything yet.

Dolby Vision is coming to Xbox One