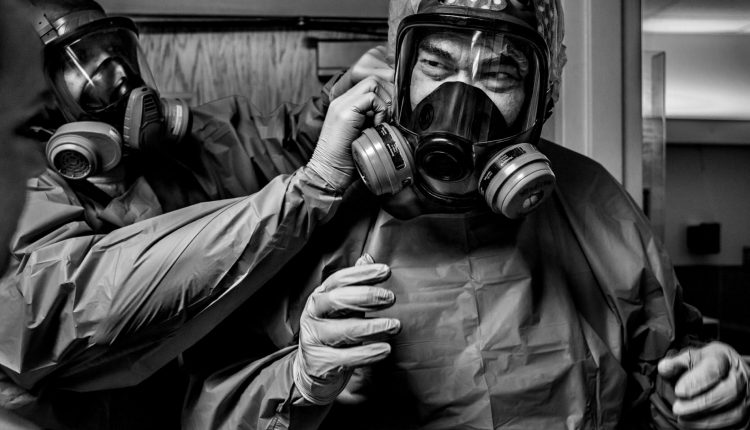 National Geographic photographers document a year that tested, isolated, empowered, and brought hope to the world.

As Black Lives Matter protesters took to the streets to protest police brutality, the movement sparked a broader racial reckoning that led many to push for the removal of monuments to Confederate soldiers who fought to preserve slavery. In Richmond, Virginia, photographer Kris Graves captured the scene as activists transformed a statue of Confederate general Robert E. Lee into a memorial to Floyd. “It so completely summarizes the political tumult of this year and how deeply rooted these beliefs are on both sides,” Johnson says.

Through our standard image toning processes, Nat Geo de-emphasized 10 instances of the f-word that were visible in the photograph. “It’s an extremely rare step for us to take,” writes Editor in Chief Susan Goldberg in the January issue. “We believe that prominently sharing the photo is more important than de-emphasizing a certain swear word; the toning does not diminish its message or impact.”

National Geographic photographers document a year that tested, isolated, empowered, and brought hope to the world.

After all the tumult of 2020—an extraordinary year that brought a deadly pandemic, political turmoil, racial reckonings, and record-breaking wildfires—it’s fitting that National Geographic is publishing its first-ever Year in Pictures issue.

Rather than simply covering the year’s most pivotal events, the January issue aims to capture the many ways in which this year tested us, isolated us, empowered us—and even gave us hope. Our photographers reflect on our collective longing for safety, why it was important to document these times of social upheaval and the moments of discovery they experienced while stuck at home. (How photography helps us make sense of this unforgettable year.)

Whitney Johnson, vice president of visuals and immersive experiences, says this year allowed National Geographic to tell stories in a different form. While our photo editors usually send photographers around the world to cover crises and conflicts, this year we asked them to document how those stories were unfolding within their own communities—an approach that allowed us to reach out to even more photographers, each with unique perspectives on the world around them.

While it was admittedly a challenge to find glimmers of hope in such a dire year, many of these images nonetheless reveal the resilience of human spirit and the power of scientific discovery—from the protestors gathered in Washington, D.C. who forced the nation to grapple with centuries-old injustices, to the innovative ways families found to be together in an isolating time.

“These images give us a shared sense of community,” says Kathy Moran, deputy director of photography. “We are isolated, but through that visual expression of the experience of the year that we can share in that moment. We do feel that isolation and we do feel that hope and we feel empowered. That’s what photography gives us. It connects us in a very different way.”

Here are 10 of the many unforgettable images from our Year in Pictures.

Fifty-seven years to the day after Martin Luther King, Jr., delivered his “I Have a Dream” speech in front of the Lincoln Memorial, another march drew thousands of people to Washington, D.C., to protest police brutality and racial injustice. To capture this scene, Stephen Wilkes photographed from a single fixed camera position on an elevated crane, making images at intervals throughout a 16-hour period. He then edited the best moments and blended them seamlessly into one image.

“This is Stephen bringing his unique way of capturing time to one of the seminal moments of the summer,” Moran says. “The beauty of it as you look through this photograph, not only do you get that sense of movement across that day but on all those different screens you see the main characters, including Rev. Al Sharpton and Martin Luther King’s granddaughter, who were critical to the day’s success.”

In Mons, Belgium, nursing colleagues take brief refuge in a shift break and each other’s company. Like medical facilities around the world, Belgian hospitals were initially overwhelmed by the rush of patients with a virulent new disease. These nurses, pulled from their standard duties, were thrown into full-time COVID-19 work—reinforcement troops for a long battle. These nurses were so caught up in their exhaustion that they hardly noticed Cédric Gerbehaye, a veteran photojournalist who has covered conflicts in Congo and the Middle East.

“It was the first time he felt fear so close to home,” Johnson says. “I think that’s the reality for these photographers. They are so accustomed to going somewhere else to find those stories and feel that fear and here it was right in their back yards.”

After more than two months without any human touch, Mary Grace Sileo (left) and her daughter, Michelle Grant, and others in their family had a solution. They hung a clothesline and pinned a drop cloth to it in Sileo’s yard in Wantagh, New York. With one on each side, they embraced through the plastic. “In spite of everything that we’ve been facing, we still look for ways to connect,” Moran says.

Firefighters across California battled massive wildfires that scorched millions of acres and forced hundreds of thousands of people to evacuate their homes in what was a record-breaking fire season. Photographer Stuart Palley, a qualified wildland firefighter who has photographed more than 100 fires throughout the state, covered the wildfires for National Geographic. While he’s watched fire seasons get continuously worse over the years, he notes that he’s never seen one quite like this. “It’s a fire siege,” he says.

Physician Gerald Foret dons a protective mask before seeing COVID-19 patients at Our Lady of the Angels Hospital in Bogalusa, Louisiana. Between the pandemic and the raging wildfires, safety was top of mind for everyone in 2020—including Nat Geo’s photo editors. “This was a year when we were hyper-vigilant about our photographers’ safety,” Johnson says. Rather than sending photographers across the world, many stayed closer to home to reveal how this global crisis was affecting their own communities.

When the state of lockdown was lifted in Italy, postponed rituals could take place. Photographer Davide Bertuccio captured one of the country’s first post-lockdown weddings as Marta Colzani and Alessio Cavallaro donned masks inside the Church of San Vito in the town of Barzanò, near Milan. The Vatican issued a decree in March allowing bishops to use their discretion when planning religious services.

Nat Geo marked the 100th anniversary of women’s suffrage in the United States by reflecting on how modern activists are promoting civic engagement—amid what would prove to be a contentious presidential election year. Photographer Celeste Sloman made this portrait of Winter BreAnne, a youth activist from Riverside, California, who has developed a program aimed at convincing young people that voting matters.

“That’s how we elect the people who represent us,” BreAnne says. “If we aren’t voicing our opinion that way, when we have the ability and not everybody is afforded that right, we are relinquishing a lot of political power.”

“It was very easy to find pictures that showed a world in isolation,” Johnson says of the curation process for the Year in Pictures issue. In 2020, the COVID-19 pandemic cut entire nations off from one another and devastated local economies that rely on tourism. In this image taken by Muhammad Fadli, Indonesia’s Yogyakarta International Airport—a new facility in Central Java built to handle an eventual 20 million travelers a year—stands empty a day after the government announced stringent travel restrictions.

“So much of the work that was done in the last year was in many ways looking for the COVID silver lining,” Moran says. With Tanzania’s Serengeti National Park closed to tourists, wildlife photographer Charlie Hamilton James discovered that one of the silver linings of the pandemic was having the Serengeti all to himself—aside from the occasional stampede of wildebeests racing across a dusty hillside.

Liverpool were ‘missing’ one thing from their title triumph…

Scientists Spot A ‘Space Hurricane’ For The First Time

What Can The Faces On Its Currency Tell Us About A Country?

Newfound meteorite could help unlock secrets of the solar…