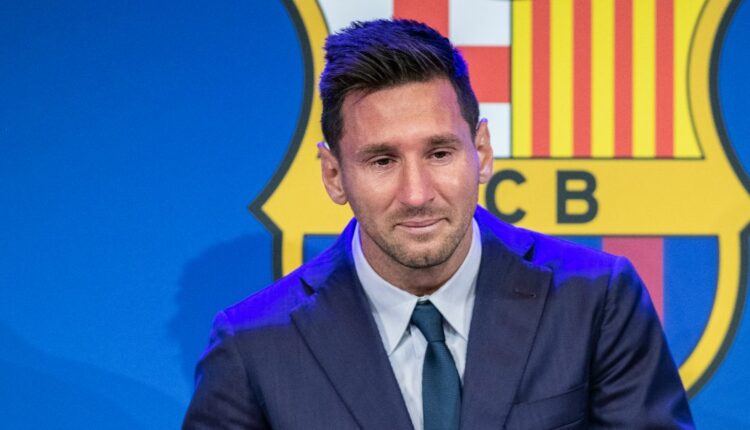 While Lionel Messi’s departure from Barcelona dominated the headlines, there were plenty of eye-catching moments elsewhere around the world over the weekend.

We’ve rounded up the best of the action on and off the field.

Greatest Applause
Of
All
Time pic.twitter.com/YoJt8nkTZc

Lionel Messi, again
Looking back, he didn’t do too badly.

🏆 All of Messi’s collective trophies at the press conference. #FCB pic.twitter.com/Dw8hPC8XR2

Bruno Fernandes
Fernandes has picked up where he left off last season.

Good Morning to everyone especially to @B_Fernandes8

Pierre-Emerick Aubameyang
Pierre-Emile Hojbjerg had to pay for a ticket to get back inside the stadium.

Tottenham
A class gesture from the Spurs fans.

Rivalries aside. What a moment this was this afternoon.

James Maddison
Maddison won the Community Shield and also had time for a quick selfie on Saturday.

A mid game selfie with @Madders10, as you do. 🤣 pic.twitter.com/7Gx9oxPnzT

Riqui Puig with a fantastic curler into the far corner! 😍

That seals a 3-0 win for Barca 🔥 pic.twitter.com/d7GCpEletE

Picking up where he left off 🔥

An Erling Haaland hat-trick puts @BlackYellow comfortably through to the next round 📽️#DFBPokal #WIEBVB pic.twitter.com/MgS8gYfU6e

Álex Moreno uses his arm to score 3-2 against Roma, the referee does not cancel the goal and Lorenzo Pellegrini and Mourinho are sent off due to the protests. Terrible arbitration.pic.twitter.com/K7bdQsRSIc

Noni Madueke
England have yet another exciting young talent to keep an eye on.

Cut through the Ajax defenders like a hot knife through butter 🧈

You’re going to be seeing that name pop up a lot this season.#NXGNpic.twitter.com/Rlxiw8qOxy

“We say that we have a s**t league, but if we manage to bring in a player like that it would be exceptional. I’m not going to be polite here, but he gives me a hard-on.” (via RMC)

Gaetan Laborde
We could watch this on repeat all day.

Laborde with a DELICIOUS curling effort for Montpellier! 🙇‍♂️

Jack Grealish
The No.10 shirt is clearly more than just a number for Man City’s new signing.

When Jack Grealish found out he was gonna be number 10 😁

Freddie Ladapo
Football really wasn’t the same without fans inside the stadium.

Kamaldeen Sulemana
Not a bad way to mark your debut.

The composure, the bend, the finish, the celebration 👌🏿

What a way for Kamaldeen Sulemana to score his debut goal for #Rennes pic.twitter.com/1b1VptFAvL

Keith Stroud blowing a kiss to the ball to kick-start the new season.

We are so through the looking glass.#CelebrityRefs

Ryan Kent
We have no idea what he was trying to do here.

Achraf Hakimi
We feel like Messi is going to really enjoy playing with Hakimi.

Get you a right-back that loves getting forward… What a finish! pic.twitter.com/fDaNxYUsXw

Burak Yilmaz
The 36-year-old continues to prove that age is just a number.

Burak Yilmaz in the 97th minute for Lille 😤

The reigning champions were seconds away from an opening day loss but managed to get a point from 3-1 down! pic.twitter.com/vAb2tAxceO