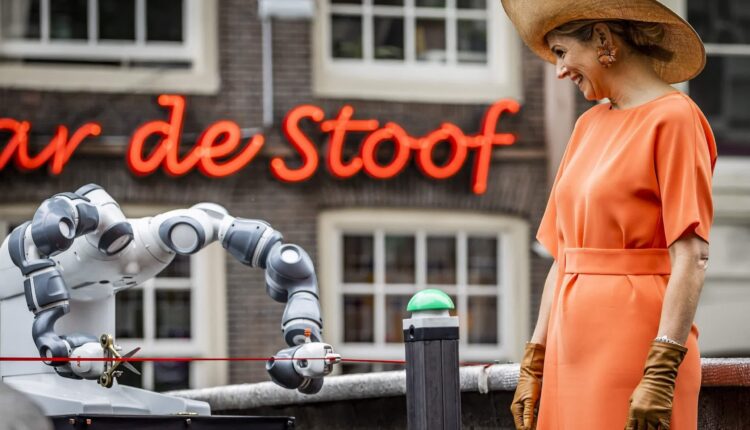 WTF?! It’s a turn of events that seems like it was spat out by a neural network trained on Elon Musk tweets and Black Mirror episodes, but on Thursday, Queen Máxima of the Netherlands ceremonially opened a 12m (40ft) long steel bridge in Amsterdam’s red light district, the first in the world to be 3D printed.

Technically, the Queen didn’t do the job herself, instead pressing a green button that prompted a robot arm to cut a ribbon for the bridge’s opening. While that might seem a bit odd in a vacuum, given the world-first of the bridge and the robotic wire-and-arc additive manufacturing (WAAM, because everybody loves a clumsy acronym), it was more symbolic than anything else.

WAAM uses gas-metal arc welding to deposit layers of metal when printing a structure, a much faster process than building using powdered metal. The end result, in this case is a unique design that looks more sculpted than engineered, which Tim Geurtjens of the fabrication company MX3D said was a major advantage in making more exotic designs easier to build.

“If you want to have a really highly decorated bridge or really aesthetic bridge, suddenly it becomes a good option to print it,” he told AP. “Because it’s not just about making things cheaper and more efficient for us, it’s about giving architects and designers a new tool – a new very cool tool – in which they can rethink the design of their architecture and their designs.”

The bridge has also been fitted with sensors, so that researchers from Imperial College London can monitor the structure’s response to being in use and the stresses of pedestrians crossing it.

Amsterdam councillor Micha Mos, however, had more lofty ambitions for the bridge, hoping that the 6-ton structure could help with the perception of the area and its image. “This may attract a new kind of visitor, one who is more interested in architecture and design, which will help change the way the neighborhood is perceived as more of something you want to visit, but visit respectfully than it has been over the few last decades,” he told AP.

If it’s going to do so, it had better start doing so quick though — the bridge is only set to be in place for two years while the location’s previous bridge is being renovated.