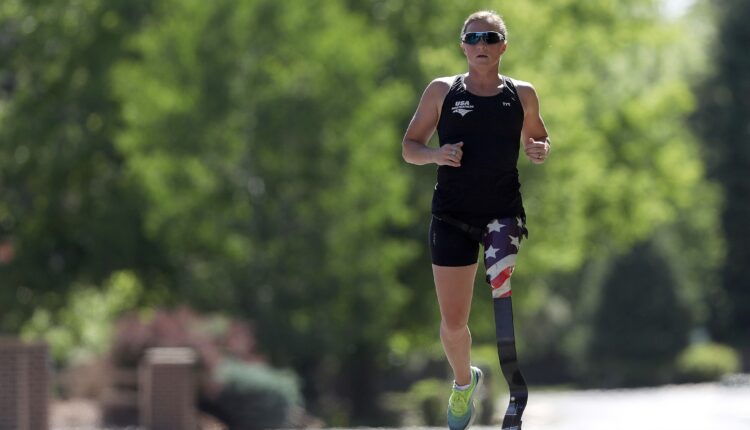 4 Life Lessons From Triathlete Melissa Stockwell That Anyone Can Follow

UPDATE—August 28, 2021: On August 28, Melissa Stockwell placed fifth in the women’s triathlon PTS2 at the 2020 Tokyo Paralympic Games with a time of 1 minute, 21.25 seconds. As she ran toward the finish line, Stockwell blew kisses to the crowd, pumped her arms in the air, and formed a heart with her hands.

“I was overcome with pure joy on my last lap of the run today and coming through the finish,” Stockwell wrote on Instagram after the race. “I said I was going to race with heart and today I did just that. And for that I am proud.”

ORIGINAL STORY—August 27, 2021: Eight weeks before the Paralympic Games, triathlete Melissa Stockwell experienced a severe bike crash while training for Tokyo. The three-time world champion and U.S. flag bearer told followers she was riding on a bike path when she ran over a branch and lost control before colliding with a tree.

At the hospital, doctors discovered she had fractured her L2 and L3 vertebrae and severely bruised her pelvis. Her injuries sidelined her from training for three weeks.

Most athletes would be devastated by such a traumatic accident, especially so close to a global championship. But Stockwell was able to take the incident in stride.

“It’s never an ideal time to fracture a back, especially eight weeks before the Games, but I mean, it’s kind of like the loss of a leg, right? It happened and it’s not growing back any time soon. I had to accept it and move on,” Stockwell, who lost her left leg while deployed in Iraq 17 years ago, tells SELF. “And then that acceptance propelled me into a life I never would have imagined.”

The Army veteran will represent Team USA at the Paralympic Games, which began earlier this week. She will once again take on one of the toughest events the Games has to offer: the triathlon. The grueling contest includes 750 meters of swimming (just under half a mile), 20 kilometers of cycling (about 12.5 miles), and 5 kilometers of running (3.1 miles).

Before Stockwell left for Tokyo, SELF caught up with the Paralympic bronze medalist to learn how she fosters an undeniable sense of resilience to come out on top again and again.

1. Focus on what you have, rather than what you’ve lost.

Everything changed for Stockwell in 2004. While serving as a second lieutenant in the Army, Stockwell was driving with her unit from the airport to the Green Zone in Baghdad when their vehicle was struck by a roadside bomb. As a result Stockwell lost her left leg. She was the first female soldier to lose a limb in the Iraq War and was awarded a Bronze Star and a Purple Heart for her service.

“Obviously, losing my leg was a traumatic event, but I had the power to choose how I went from there,” she told the Chicago Tribune in 2016. “So I chose to accept the loss of my leg, to be resilient through it and to make my life what I wanted it to be.”

Stockwell tells SELF she actually felt lucky in her situation, all things considered. During her rehabilitation at Walter Reed Army Medical Center, Stockwell says, she was surrounded by fellow soldiers who were missing multiple limbs, had traumatic brain injuries, and more-severe wounds. This helped encourage her to see things a little differently.

“I only lost one leg. I had my life, I had three limbs. So it kind of puts things in perspective,” she says. “I think life is all about perspective. You think you have a battle, and all you have to do sometimes is look around and actually realize how good you have it.”

“I learned if you dedicate yourself to a sport, train hard enough, you can compete on the world’s biggest athletic stage,” she says. “So the dream was born really quickly. And what better way to prove to myself, prove to others, that losing a leg wasn’t going to stop me from getting out there and really doing anything that I wanted to do?”

As part of her initial post-injury rehab, Stockwell started to swim and, as she told Olympics.com, she immediately felt a connection to the sport. Swimming soon became her focus.

By 2008—just four years after her accident—Stockwell was ready to take swimming to the big stage. She competed at the Paralympic Trials with the hope of making Team USA in Beijing—and ended up breaking the American record in the 400-meter freestyle. This made her the first Iraq War veteran to qualify for the Paralympic Games.

After the Beijing Paralympic Games, Stockwell decided to focus on triathlon and promptly made her mark on the sport, earning three consecutive world titles from 2010 to 2012. In 2016 she competed in the inaugural event at the Paralympic Games in Rio de Janiero, where she contributed to a historic Team USA podium sweep in the PTS2 category (a classification that includes “severe impairments” and allows athletes who are amputees to use approved prosthesis or other supportive devices, according to World Triathlon). She earned bronze behind American teammates Allysa Seely, who won gold, and Hailey Danz, who earned silver.

3. Take things one step at a time.

Although Stockwell sets big, ambitious goals, she understands the smaller, day-to-day stuff is a key part of the process. Even before her recent bike accident, Stockwell has placed a great importance on honing the mental side of her training by learning to trust the groundwork she’s already laid.

“[A lot of it is] finding little baby steps and progress each day, so when you arrive at that starting line of a race, you know what you’ve done is enough,” she says.

This approach became even more critical during the aftermath of the bike crash, when Stockwell had to “gradually get back into things” at a time when athletes are normally peaking for optimal performance at a championship event. Instead, Stockwell had to focus on recovery, and under her doctors’ guidance, come back to the sport slowly. First she returned to the pool and built up her strength to swim a few laps at a time. Then she returned to the bike on July 19, sharing her progress on Instagram with a post describing how she took the ride slowly and cautiously.

“[Returning to swim and bike] was on such a condensed time frame,” she says. “But that’s just the mental strength to know that I needed to give it time, to give little things every day and hope that I’ll be ready to go on race day.”

At the time of her interview with SELF, Stockwell anticipated her first run since the accident would be during the Paralympic Games. But on August 18, she shared a photo with a positive update. “For the first time in what feels like forever, I put my running leg on yesterday and ran a full mile!” she wrote. “To say I am excited is an understatement.”

Although the accident threw a wrench in her preparation, Stockwell prefers to focus instead on the fact that she made it to the Games at all.

“How lucky [am I] that I got into such a severe accident and will still be on that start line in Tokyo?” she says. “I mean, it could have been so much worse. I could have had a head injury. I could be paralyzed. I could be dead, but here I am with an injury that will hopefully heal enough in time for me to be on that starting line.”

In handling the loss of her leg and eventually becoming one of the best triathletes in the world, Stockwell has thrived off the support of a team around her. Friends, family, coaches, a sports psychologist, and a number of professional sponsors, including ChapStick—Stockwell is a brand ambassador as an extension of the brand’s support for military and first responders—have helped reassure the Chicago native to have faith, especially when faced with difficult circumstances, she says.

“I wouldn’t be where I am without a team,” she says. “When you have people surrounding you that want you to get better, they want to achieve similar goals that you want to achieve, they lift you up when you need it, they’re there to celebrate in the highest moments. I mean, life is all about friends and team and finding people to trust in, to lean on. We’re really all in it together, so we might as well have a good team around us.”

Grateful for the support she’s received over the years, Stockwell wants other athletes to experience the same benefits. In 2011 she cofounded Dare2tri Paratriathlon Club, a nonprofit organization whose mission is to encourage recreation, racing, and competition for athletes “who are not labeled by their physical ability, but rather their determination and will to succeed.” Stockwell serves as a mentor to fellow Dare2tri athletes and aims to pass on a resilient mindset, which has helped her thrive in the sport and beyond.

“Don’t tell yourself that you can’t do something unless you try it first,” Stockwell tells the athletes she works with. “I think we’re so easy to jump to conclusions that ‘I can never do that,’ but if you just try it, you find out that not only can you do it, but you might be good at it, and you might enjoy it. And we don’t give ourselves enough credit on the things that we are capable of doing.”

Stockwell will represent Team USA once again in the Paralympic triathlon on Saturday, August 28 in Tokyo.