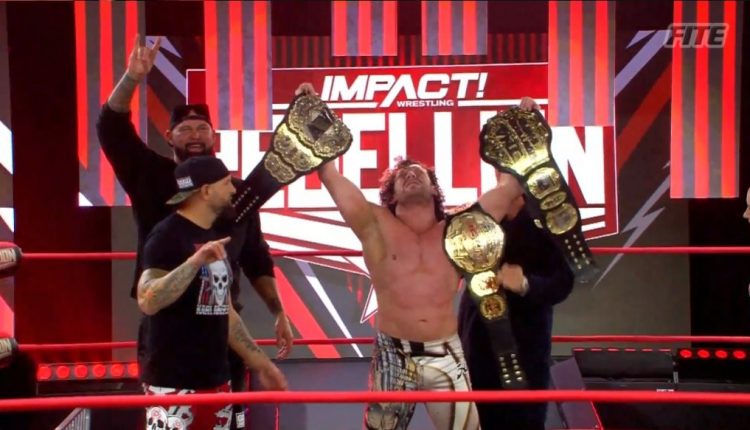 The so-called belt collector was true to his name as he represented AEW in an historic winner takes all title versus title match and emerged victorious.

In a nice twist, there were no real shenanigans as many fans had feared – especially with the mid-show announcement that Aubrey Edwards would be joining IMPACT’s own Brian Hebner as a second referee – and Omega won with the One-Winged Angel.

Swann lost absolutely nothing in defeat (besides his championship), putting in a spirited and entertaining performance against one of the best in the world.

With AEW and IMPACT’s respective bosses Tony Khan and Scott D’Amore watching on, this match was everything it needed to be – and the return of Mauro Ranallo to pro wrestling commentary gave this the big fight feel it deserved.

TK’s company didn’t promote this as effectively as they could – or at all – but this was a significant result which will see Omega appear for both promotions as their champions.

Just adding to the surreal sight, the TNA World Title comes as part of the deal.

Elsewhere, IMPACT made the most of the extra eyeballs on their show with other big moments, including Josh Alexander capturing the X-Division Title in a fantastic opening bout, and the team of Jordynne Grace and Rachael Ellering winning the Knockouts Tag Team Titles with Jazz as ringside.

As if that wasn’t enough, IMPACT dropped a major hint for Slammiversary this summer with an epic promo officially announcing the show and teasing some major names.

Earlier this month, WWE released some stars – and plenty of them were referenced in the video, with the returns of Samoa Joe, Mickie James and Chelsea Green all teased for the show.

There were also more subtle references to the likes of IIconics duo Billie Kay and Peyton Royce, with fans abuzz with speculation looking ahead to the event in July.