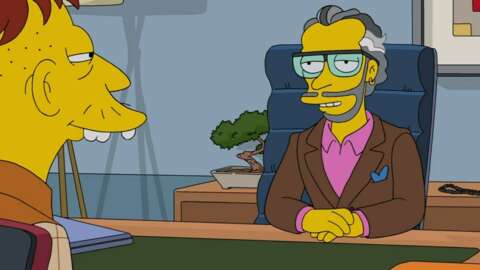 Albert Brooks Is Back On The Simpsons, Here’s The First Look

Actor Albert Brooks is guesting on The Simpsons, helping a newly-famous Cletus navigate the world of stardom, and Fox has a first look at the episode for us ahead of its Sunday, March 7 air date.

Brooks is no stranger to appearances on The Simpsons. The actor is best known for movies like Drive and Broadcast News, but this will be his eighth appearance on the show, with this first cameo during the first season in 1990. He’s played car salesmen, a seductive bowling coach, and a self-help guru. Oh, and he also voices Springfield’s own supervillain, Hank Scorpio.

This week, he plays Slick Manager. That’s his name, apparently, not his job. He’s also a slick manager, though. In this episode, titled “Yokel Hero,” Cletus (Hank Azaria) has made it big singing, and betrays Homer to sign with Mr. Manager. Simpsons executive producer Al Jean told Variety that Brooks’ role in the show is one of his bigger ones, and that he’ll be a part of “almost all of the third act.”

“Yokel Hero” is The Simpsons’ 698th episode. The 700th episode, “Manger Things,” airs March 21. Per Variety, the episode will feature a new couch gag and will reveal a never-before-seen room in the Simpsons’ home. Episode 700 is far from the last, as The Simpsons has been renewed for Seasons 33 and 34.

iiRcade Review — An In-Home Arcade With An Ever-Growing Library