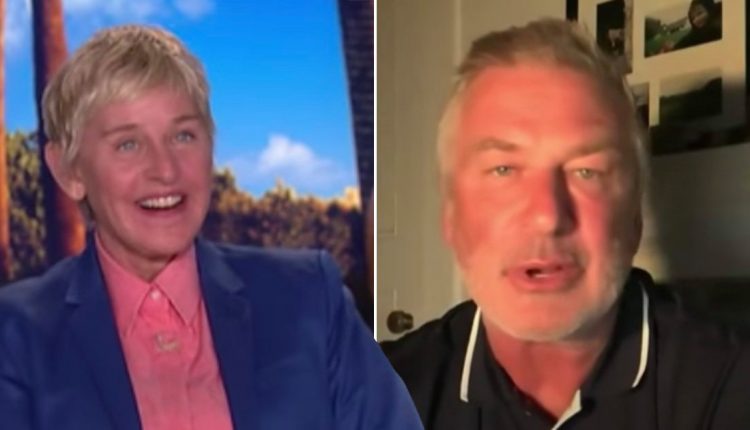 The star made an appearance on Wednesday’s episode on the opening week of The Ellen Show’s new season.

And after Ellen thanked the actor for taking time to join her virtually for a chat, he paused the interview to share his thoughts.

The former 30 Rock star stated: ‘Before we talk about my kids, Ellen, I just want to say, you are someone, I’ve followed your career from when you were doing standup and you were a solo performer.

‘I’ve watched the films you’ve done and I’ve watched your success on this TV show, and you are one of the funniest and most talented women, one of the most funny and talented people in all of show business.’

The 62-year-old continued: ‘We all have some patches of white water here, but you keep going. Don’t you stop doing what you’re doing.’

Ellen thanked the star for his kind words and agreed that there had been ‘some rapids’ but she insisted was ‘maneuvering the raft.’

The duo then went on to discuss the fact Alex recently welcomed his fifth child with wife Hilaria Baldwin, but Alec couldn’t resist saying a few more encouraging words to Ellen.

He added: ‘You just keep moving forward because it’s not the same without you. You’re funny.

Meanwhile, Monday’s show saw Ellen kick off the new season with a monologue apologizing for the conditions that staff had reportedly had to endure behind the scenes of her long-running daytime talk show.

While some former employees still felt that she was wrong to joke about the matter in the monologue, fans and celebrities praised the speech.

MORE: Ellen DeGeneres made ‘big mistake’ by not owning apology: Her next move to win back trust

Loo roll rationed to one pack per customer in Iceland store

Great British Bake Off: Start time, channel, line up and when was it filmed?

Loo roll rationed to one pack per customer in Iceland store

LeBron James: See His Transformation From Rookie Sensation To One Of…

Andrew Neil ‘unhappy by how the BBC has treated him’ amid…