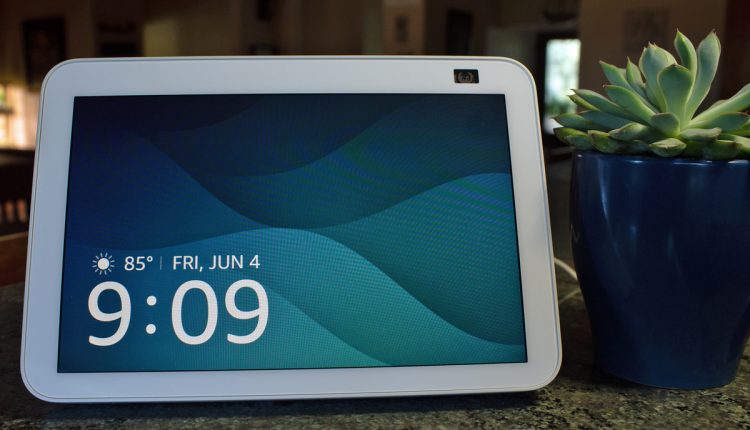 If you’ve decided that Alexa is the digital assistant you want in your home, the Echo Show 8 is an excellent mid-range smart display. If you’ve settled on Google Assistant instead and deployed a lot of those speakers, there’s probably nothing here that would make starting over a worthwhile endeavor.

The Echo Show 8 has a bright, vibrant 8-inch touchscreen display with moderate resolution of 1280 x 800 pixels and very good off-axis viewing angles; a pair of 2.0-inch built-in speakers, plus a passive radiator, that deliver pleasing background music; and a 13-megapixel, wide-angle camera that digitally pans and zooms to keep you in the frame when making video calls. It’s a worthy successor to the first-gen Echo Show 8, and enough of a step up to warrant ditching the one you already have—especially if you want to move the first-gen model into another room.

This review is part of TechHive’s coverage of the best smart speakers, where you’ll find reviews of the competition’s offerings, plus a buyer’s guide to the features you should consider when shopping for this type of product.

And if you’re using Echo devices to control your smart home, it’s almost impossible to have too many of them around the house. That said, they will fight with each other to serve you if they’re too close to each other, and that can be annoying in the extreme. I am disappointed to report, however, that the new Echo Show 8 doesn’t include a Zigbee smart home hub. If that’s a must-have feature for you, you’ll need to forgo the display and buy the $100 Echo (4th Gen) or $200 Echo Studio, or step up to the $250 Echo Show 10 (3rd Gen) if a display is another must-have feature.

It’s also puzzling that nothing in Amazon’s smart home ecosystem supports Thread today, even though Amazon is a member of both the Thread Group and the Connectivity Standards Alliance (formerly the Zigbee Alliance).

Amazon’s second-generation Echo Show 8 carries the same price tag as the original 8-inch smart display, although you’ll find Amazon is clearing out its existing inventory with steep discounts. A 13-megapixel front-facing camera is the main appeal here—that’s a huge step up from the 1MP camera in the original—and it can do some very interesting things. Most importantly, when you make video calls—either Echo-to-Echo or using Zoom—the camera will automatically track your face and digitally pan and zoom to keep you in frame (from the perspective of the person you’re speaking with, that is).

If more than one person is in front of the camera, you can designate one person as the priority subject, and the Echo will do its best to keep that one person in the frame. This digital trickery can’t do magic, however, and you don’t need to move all that far to the left or right to defeat its best efforts. If you want something that will really track you around the room, you need to buy the more-expensive Echo Show 10 with its revolving display.

A new feature launched late last year enables you to make group calls—either audio or video—with as many as seven people on the call. You’ll need to create a group from the contacts in your Alexa app, give the group a name—My Family, for example—and then you can say “Alexa, call my family” and the display will send out calls to everyone in the group. Everyone in the group will need to have a compatible Echo device or at least the Amazon Alexa app on their smartphone. Once one person has created that group, anyone in the group will be able to initiate a call to that group, so no one needs to re-invent the wheel.

An entirely new Reactions and AR Effects feature that’s billed as “coming soon” will let you tap on the display during Alexa calls (or Drop In sessions with another Echo smart display) to add graphical overlays of things such as hearts and confetti as reactions during calls). AR Effects, meanwhile, will let you appear in street art, classical paintings, and similar augmented reality scenes. This feature was not available for review, so I can only report as to how Amazon has described it.

The Echo Show 8 makes a great digital picture frame, and it can draw from your online collection of photos if you store them with Amazon (Amazon Prime members get unlimited cloud storage). Take advantage of the shared home screen feature, and approved family and friends who are designated as Alexa contacts can contribute to the pool of photos that are displayed on your home screen when the display is not otherwise being used. The Echo Show 8’s new adaptive color display makes photos pop in any ambient light.

At my house, Alexa is the glue that holds my smart home together. While most of my lighting controls are based on Z-Wave technology controlled by my Vivint smart home system, there are some areas where Z-Wave isn’t really an option. So, over the years, I’ve installed some color Philips Hue bulbs and landscape lighting devices, along with Wi-Fi-based in-wall switches, dimmers, zone controllers, and even an outdoor multi-tap. My Vivint system can control Hue smart bulbs, but it doesn’t know anything about Hue fixtures or about managing Wi-Fi products. But it really doesn’t matter because Alexa does.

What’s even better is that the Alexa app lets me group disparate devices together so that I can create “scenes” with various devices and control them with a single voice command, even if they’re made by different manufacturers and connect to my network in different ways. For example, I have a scene called “Kitchen” that turns on (and off) a pair of pendant lights over my kitchen counter, three undercabinet lights in the same room, a sconce at my wet bar, and a spotlight over a painting above my fireplace in the great room.

I still need to have smartphone apps for all these disparate platforms (and the accounts to go with them), but once they’re incorporated into my Alexa app, I rarely need to look at anything else because I use voice commands for everything. And like all Echo Show devices, the Echo Show 8 can also display live streams from my Ring video doorbell and security cameras (cameras from several other manufacturers are supported, too), and I can engage in two-way conversations with people on the other side of the camera. And when you want to make absolutely sure the camera can’t see you, you can slide a shutter over its lens to block it. You can also mute the speaker’s four far-field microphones and electronically block the camera by tapping the mute button.

When you’re away from home, you can use the Echo Show 8’s built-in camera as a home security camera that you can monitor with your smartphone. Once you’ve enabled Home Monitoring on the device, just pull up the Alexa app and tap on the camera name to initiate a live feed from the camera. For the sake of privacy, the smart display sending the feed will sound a tone when streaming is initiated, and a message will appear reporting that “A household member is viewing your camera.”

Another cool feature lets you use the Echo Show 8 as an occupancy and vacancy sensor. When it detects people in the room, it can trigger lights to turn on, play music, or initiate other smart home events. After the room has been vacant for a while, a different set of events can be programmed to play out. I set up the display to turn on the lights in my home theater when I entered the room, and to turn the lights off and close the shades when the theater was unoccupied. This feature could use a bit more finesse, however, since it doesn’t allow you to define additional conditions—such as what time of day these actions should occur. You might not want to the lights to come on during the day, for instance.

The new Echo 8 has a very slightly larger footprint than Google’s least-expensive smart display, the Nest Hub (2nd Generation): 5.4 x 7.9 x 3.9 inches (HxWxD) compared to the Nest Hub’s 4.7 x 7.0 x 2.7 inches, but Amazon’s product has a bigger display and Google’s doesn’t include a camera. Google says this is to soothe privacy fears and encourage users to install the device in their bedrooms, where it can track their sleep (a feature that might not stay as free as it is today).

The Nest Hub supports gesture control, which will come in handy in situations where you don’t want to touch the screen (while you’re cooking, for example). I’ve been impressed with the audio performance of Google’s smart home products, but I haven’t heard the second-gen Nest Hub, so I can’t say which speaker sounds better. But I will point out that the Echo Show 8 has two 2.0 drivers and a passive radiator, where the Nest Hub has a single 1.7-inch speaker.

That said, the Echo Show 8’s speakers aren’t anything I’d want to use to listen to all day long, at least as far as music goes. (To be fair, I’ve been spoiled by Sonos and other higher-end audio equipment). If you’re in the Google ecosystem, you’ll likely prefer using Chromecast over streaming music via Bluetooth or a streaming service using conventional Wi-Fi. And while you can watch Netflix, Hulu, and Amazon Prime Video on an Echo Show, watching YouTube remains a kludgey experience on Amazon’s smart displays.

The Echo Show 8 is an excellent smart display that improves on everything the Echo ecosystem is good at—particularly smart home control—and its dual-purpose camera is excellent. It will take more than that to convince dyed-in-the-wood Google Assistant users to switch, but if you’re choosing your first smart display, you’ll be rewarded for spending another $30 (over the Nest Hub) to get the Echo Show 8’s 13MP camera, adaptive color display, and more robust smart home capabilities.

Michael covers the smart-home, home-entertainment, and home-networking beats, working in the smart home he built in 2007.

Are You Really Ready to Quit?