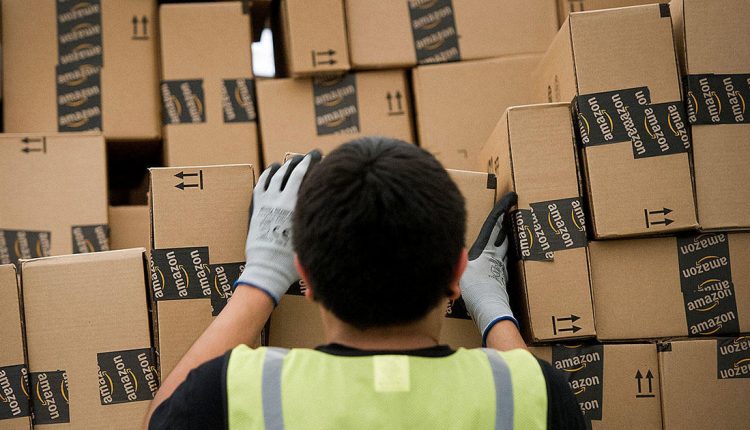 An employee loads a truck with boxes to be shipped at the Amazon.com Inc. distribution center in Phoenix, Arizona.

CBS Essentials is created independently from the CBS News staff. We may receive commissions from some links to products on this page. Promotions are subject to availability and retailer terms.

Amazon Prime Day, the online giant’s largest sales event of the year, is on. Despite the name, Prime Day is actually a two day event, running from June 21 through June 22. For those two days — and while supplies last — all sorts of great products from popular brands will go on sale across all of Amazon’s sales categories.

There are deals on Amazon products (of course), deals on TVs, deals on streaming sticks and media boxes, deals on kitchen appliances such as the Instant Pot, deals on dental care products and whitening kits, deals on men’s fashions, deals on … well, you get the point. There are a lot of Amazon deals.

But it’s not just Amazon offering deals. Walmart’s own competing Prime Day sale is called Deals for Days, and runs through June 23. Best Buy is having a big sale too, as is Kohl’s, Costco and Target. Even online pet retailer Chewy is getting in the act. And you don’t need to be an Amazon Prime member to shop these deals.

In short: If you’re in the market for just about anything, these next few days are a good time to shop.

Featured Prime Day deals at Amazon The following Amazon Prime Day signature deals run through Tuesday, June 22 on Amazon. Many require you to have an Amazon Prime membership. It’s possible some sales may extend into Wednesday and beyond, but there are no guarantees.

This 43-inch 1080p Amazon Fire smart TV, a 2020 model, is on sale for $100 off its list price for Amazon Prime Day. It includes an Alexa-enabled voice remote that allows for hands-free control.

This entry-level Ring video doorbell utilizes your existing doorbell wiring for power and connects to your home network via Wi-Fi. It doesn’t have all the advanced features of high-end Ring models, but you do get the basics: 1080p live video, two-way talk, real-time notifications, night vision and Alexa compatibility. It won’t work with your existing doorbell chime, but it will work with the Ring Chime, a $30 add-on chime box sold by Amazon.

The Ring Video Doorbell Wired normally retails for $60. You can get it for $45 through Prime Day, a discount of 25%.

These wireless headphones from Bose feature 15-hour battery life, on-ear controls and seamless switching between two Bluetooth devices (a phone and work laptop, for example). At just 6.88 ounces, they’re a lightweight choice. But don’t worry about breaking them on the go: They come with a protective case.

You can also get these headphones in white.

This whitening kit from Crest, one of the most popular on Amazon, includes 20 treatments. It delivers noticeable results in 3 days and full results in 20 days (when used daily for 30 minutes a day). You don’t need to take the packaging’s word that it works, though — Amazon reviewers rave about this 4.6-star-rated teeth whitening treatment.

This box of Crest 3D White Professional Effects Whitestrips is on sale right now for $28, more than 44% off its $48 pre-Prime Day price.

Great for camping, hiking and emergencies, the LifeStraw personal water filter lets you safely drink from just about any fresh water source. It protects against 99.999999% of bacteria, 99.999% of parasites, 99.999% of microplastics, as well as sand, dirt and cloudiness.

You can get a two pack of LifeStraws for $20 during Amazon Prime Day, a discount of 50% off the normal price.

Designed specifically for kids ages 6 to 12, this sturdy tablet, now half off for people with an Amazon Prime membership, includes a free year of Amazon Kids+, a service that includes videos, Audible books, games, videos, apps and songs. An included app store allows kids to request apps that parents can approve and purchase.

As for the hardware, good news there: There’s a kid-friendly case included, along with a two-year guarantee, so if it breaks, you can return it and get a free replacement.

The fourth-generation Echo Dot, released in 2020, is the newest (and best-selling) smart speaker from Amazon. It doesn’t have a display screen, opting instead for an updated, spherical design.

More than just a music listening device, the Dot connects with all the other Alexa gadgets in the home, including other Echo Dots, so you can play music throughout the house simultaneously. It also controls smart home devices such as light bulbs, smart thermostats and locks.

The Echo Dot is half price for Prime Day, now available for just $25.

The seriously loud JBL Xtreme 2 Bluetooth speaker is IPX7 waterproof, which means it can withstand being dunked in up to 1 meter of water for up to 30 minutes. You can use it on the water, at home and everywhere in between: The speaker features integrated hooks and a carrying strap. There’s even an added bottle opener perfect for tailgating and pool parties. And with 15 hours of playtime, there’s no worry about your favorite song being cut short.

The blue version of this waterproof speaker is now more than half off at Amazon for Prime Day.

The 6-quart Instant Pot Duo Plus 9-in-1 pressure cooker is $60 for Prime Day.

It’s not just pressure cookers on sale for Amazon Prime Day: The 6-in-1 Instant Vortex Plus air fryer from Instant Pot is on sale for 30% off list price. The Vortex features customizable one-touch programs for air frying, roasting, broiling, dehydrating, baking and reheating. It holds up to 4 quarts of food and heats up to 400 degrees.

You can pick one up for $70 now through Tuesday, while supplies last.

The American Dental Association-accepted Waterpik Aquarius Water Flosser (WP-660) removes up to 99.9% of plaque from treated areas. It features 10 pressure settings, 7 tips so multiple family members can use it and a 22-ounce reservoir that holds 90 seconds of water capacity.

The 4.7-star-rated oral irrigator for teeth comes in five colors and is on sale for $40, a big $30 discount off its pre-Prime Day price.

Amazon’s in-house streaming platform is Fire TV. This 4K device, originally released in 2018, will make any TV with an HDMI input into a smart TV capable of streaming shows on Disney+, Hulu, Netflix and more. It comes with an Alexa voice remote and supports Dolby Atmos audio.

Normally priced at $50, the 4K Fire TV Stick is on sale for $25 during Amazon Prime Day.

Shoppers wait in line to pay for their purchases at a Walmart store in Los Angeles, California.

Walmart’s own rival Prime Day sale, Deals for Days, lasts through Wednesday, June 23. Like with Amazon’s Prime Day deals, it’s possible that some sales may extend past Wednesday. There are limited quantities, so don’t delay on pressing the buy button if there’s something you want.

Here are some of Walmart’s featured deals on name brand products.

There are a number of Apple products on sale this year during Walmart’s Deals for Days sale. To start, the Apple Airpods Pro, featuring high-quality audio, active noise cancellation, 4.5 hours of listening on a single charge and a wireless charging case that extends listening time to 24 hours, are on sale for $189. (Apple regularly sells them for $249.)

Apple regularly sells the Apple TV 4K for $179. During Walmart Deals for Days, you can pick one up for just $99.

There’s great news for people who have been thinking about buying a new Apple iPad mini: During Walmart Deals for Days, it’s never been cheaper. The 7.9-inch Retina display tablet with Touch ID fingerprint sensor, 64GB storage, 8MP back camera, 7MP FaceTime front camera, stereo speakers and up to 10 hours of battery life is on sale for $329 (regularly $399).

Last year on Prime Day, Amazon offered the older-but-still-useful Apple Watch 3 for $169. This year, during Deals for Days, Walmart is offering the same Apple wearable for the same price — $169.

Previously on sale for $39, you can get a Roku Express 4K+ streaming box for $29 during Walmart Deals for Days. Like most Roku devices, this UHD streamer comes with access to more than 150 free live TV channels through the Roku Channel, with hundreds more free channels available through Pluto TV.

(Note: CBS Essentials and Pluto TV are both subsidiaries of ViacomCBS.)

Americans adjust to life after lockdown

Judge rejects most claims over clearing of protesters from D.C. park

Dr. Jha on vaccine mandates as Delta now accounts for about 94% of cases in the U.S.