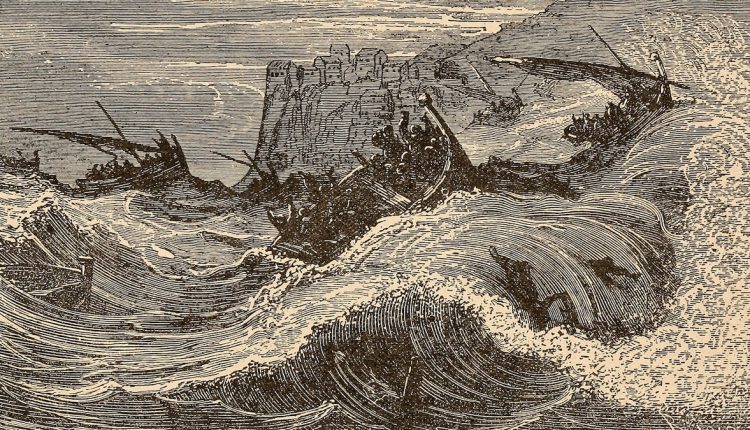 When a magnitude 8.5 mega-earthquake struck off the Indonesian island of Sumatra in February 1861, it caused the land to convulse, stirring up a wall of water that crashed on nearby shores and killed thousands of people.

Now, it seems that tragic event was no isolated incident: It actually marked the end of the longest earthquake ever recorded, which crept through the subsurface for a whopping 32 years. Known as a slow-slip event, these kinds of quakes have been known to unfurl over days, months, or years. But the newly described event lasted more than twice as long as the past record-holder, scientists report in Nature Geoscience.

“I wouldn’t have believed that we would find a slow-slip event so long, but here we found it,” says study author Emma Hill, a geodesist at Nanyang Technological University’s Earth Observatory of Singapore.

The discovery of such a slow-moving earthquake promises to help scientists grasp the surprising variety of ways our restless planet moves—and the deadly potential for these silent events to spark much more potent quakes.

Much like their high-speed cousins, slow-motion earthquakes release energy built up from the shifts of tectonic plates. But instead of unleashing it in a ground-rattling burst, slow quakes sluggishly release strain over time, and so are not hazards on their own. Still, the subtle shifts of the subsurface potentially load strain on adjacent zones along a fault, which could increase the risk of a bigger temblor nearby.

Other areas of Indonesia are already showing cause for concern. The southern island of Enganno is “sinking a little too fast,” says Rishav Mallick, first author of the new study and a Ph.D. candidate at Nanyang Technological University in Singapore. While he cautions that the data come from just one location, they hint that a slow-motion quake may already be in progress near the island.

The new study relies on an unexpected scribe of Earth’s tectonic shifts: coral.

Some types of coral, such as the finger-like Porites, grow outward and upward until they are lingering just below the water’s surface. If the water rises, the coral rapidly shoots upward again. If the water drops, the coral exposed to the air dies, while the submerged part continues growing outward. Because these corals bulk up in layers, like trees growing in concentric rings, scientists can use their skeletons to chart relative water level changes over time.

Changes in sea level can come from climate change-driven factors, such as melting glaciers, or from shifts in the height of the landscape. Off Sumatra’s western coast, the latter types of changes lay bare a subterranean battle between tectonic plates.

In this zone, the Australian tectonic plate plunges beneath the Sunda plate, but it gets stuck along a zone directly beneath an arc of Indonesian islands. As the plates collide, the descending slab tugs on the land above. This flexes the surface, which pulls the plate’s edge lower into the sea, but causes other parts of the plate to rise.

If the strain builds so high that an earthquake rips through the region, the land will abruptly shift, reversing the effect and sending some coastal areas shooting upward. Just such a shift happened after a magnitude 8.7 quake gripped Sumatra in 2005.

“As the reef moved up in the earthquake, the entire ecosystem was left exactly in place,”  study co-author Aron Meltzner wrote in a blog about his 2005 field experiences while a Ph.D. student at CalTech. Branching corals, sea urchins, shellfish, crabs, and “an occasional unlucky fish” all lay dead or dying, exposed on nearly dry land.

Meltzner, who is now a geologist at Nanyang Technological University in Singapore, returned to study the corals around Sumatra year after year to untangle the many records they hold. In a 2015 study, he and his colleagues documented the sudden shift in land movements leading up to the giant 1861 quake.

Before 1829, the ground near the island of Simeulue sank by about one to two millimeters each year, based on the coral data. But then the rate jumped suddenly, with the land sinking up to 10 millimeters a year until the 1861 temblor ripped through the region. The team initially thought the change was due to a shifting region where two tectonic plates lock together, but they weren’t sure of the precise cause.

In 2016, Nanyang Technological University’s Mallick turned a fresh eye on the coral data. By modeling the physics of the subduction zone and the movement of fluids along the fault, the researchers found that the rapid change was caused by a release of built-up strain—the beginning of a slow-motion earthquake.

Slow earthquakes have only been recognized since the late 1990s, when they were initially spotted in the Pacific Northwest of North America and in the Nankai region off the coast of Japan. Their languid energy release means they cause subtle shifts at the surface, so they weren’t discovered until GPS technology had improved enough to chart such minuscule changes.

Yet the more places researchers have looked since then, the more slow earthquakes they’ve found, from the coasts of New Zealand to Costa Rica and even Alaska. “We see aseismic slip everywhere,” says Lucile Bruhat, a geophysicist at Ecole Normale Supérieure (ENS) in Paris, France, who wasn’t part of the study team.

Slow-motion quakes take on many different flavors. In Cascadia and Nankai, the slow quakes strike with remarkable regularity, stirring every 14 months or so in Cascadia and every three to six months in Nankai. In both locations, these long-duration quakes are also accompanied by a slew of tiny quakes known as tremors.

Bruhat likens the process to a person walking across a wooden floor. “You’re moving and the wood is cracking around you,” she says. “All the cracks would be tremors.”

Over the years, scientists have also found that the duration of slow quakes can vastly differ. In Alaska, for example, researchers discovered one event that lasted at least nine years, only realizing they were looking at a slow quake after the creeping surface halted in 2004, Mallick says. The newfound event near Sumatra pushes the possible durations of slow quakes further than ever before.

“A lot of people have suggested that these bigger, longer slow-slip events are possible,” says Laura Wallace, a geophysicist at the University of Texas at Austin and GNS Science in New Zealand, who was not part of the study team. But continuous monitoring of land motions near subduction zones has only happened in the last couple of decades or so, which means “we’re really only looking at a small snapshot in time,” she says.

“It’s a hot topic right now in the field,” says Noel Bartlow, a geophysicist specializing in slow earthquakes at the University of Kansas who was not part of the study team. But precisely demonstrating that slow-slip events can actually spark bigger geologic shudders has long posed a challenge. Not every slow quake leads up to a big shake.

“The evidence is kind of growing, but it’s still limited to a few case studies,” she says.

Part of the problem is that catching a long-lived temblor in the act is not easy. The lengthy quake in the new study crept along a shallow section of the fault, which lies underwater away from the land, Bartlow explains. But traditional GPS stations are useless on the seafloor since their signals don’t penetrate very far through water. And few spots on Earth have a natural record of such movements akin to the corals of Indonesia.

There are instruments that can help, but they’re pricey, Bartlow says. She’s planning to search for similar shallow slow-slip events off the coast of the Pacific Northwest with instruments that use optical fibers to measure the strain of the surface.

Though monitoring is often considered one of the “less sexy things” scientists can do, Hill says, it’s vital to understanding our planet in all its complexities.

“Whenever we think we understand tectonics, then the Earth will throw another surprise at us,” Hill says. “The more we collect these really long datasets, the more surprises like this that we’re going to get.”