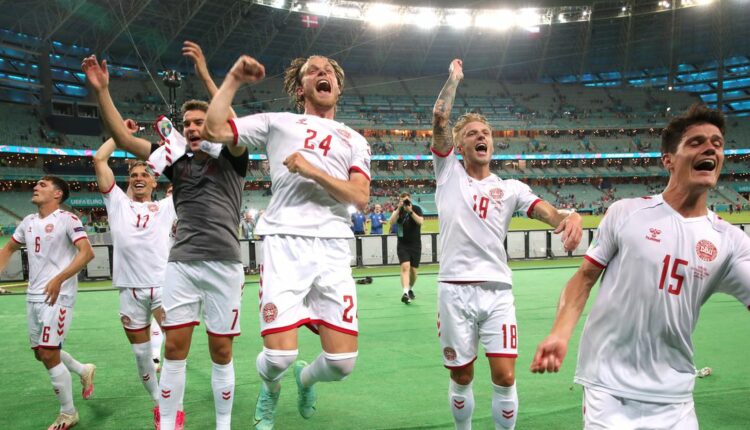 BAKU, Azerbaijan, July 3 (Reuters) – Despite the emotional turmoil they have been through, Denmark’s dream run continued as they booked a Euro 2020 semi-final spot on Saturday, inspired by a young, vibrant strikeforce who can still do further damage this summer.

A 2-1 win over Czech Republic secured the Danes a last-four spot, a victory that came on the day Christian Eriksen was spotted in public back in Denmark for the first time since being discharged from hospital following his on-field cardiac arrest.

Eriksen’s team mates have been inspired in the stricken midfielder’s absence, with their forward line proving to be too hot to handle in their quarter-final clash with the Czechs.

After Thomas Delaney’s early header, Kasper Dolberg, who only made his first Euro 2020 Denmark start in the last 16, added a second before half time in Azerbaijan, with a fine side-footed finish worthy of the grandest of stages.

The 23-year-old’s strike took his tally to three in two games after his double in the 4-0 knockout win over Wales, becoming the first player to score three or more goals for Denmark at a single major tournament since Jon Dahl Tomasson also netted three times at Euro 2004.

The lively Mikkel Damsgaard again impressed, with reports in the English media that he has attracted interest from a host of Premier League clubs.

To help create the space for the energetic Dolberg and Damsgaard to make runs into, Barcelona’s Martin Braithwaite again showed his striker intelligence in dropping deep to pull Czech defenders away from goal. The three compliment each other perfectly.

Every strikeforce needs a supply line too, and the Dane’s wing backs did their part in Baku, with Jens Stryger Larsen and Joakim Maehle registering an assist each. Maehle’s cross for Denmark’s second, with the outside of his boot, was a contender for assist of the tournament.

Kasper Hjulmand’s men did tire as the match wore on, with their attack looking less potent, but in the latter stages of a tournament, that is understandable.

The damage, however, had been done. Denmark have now scored 11 goals at Euro 2020, their highest return in a single edition of a major tournament.

With two defeats from their opening two games, the Danes are now only two wins from improbable glory. Reaching a first semi-final in 29 years meant a remarkable renaissance continues.

They may yet follow in the footsteps of the class of 1992 and become surprise European champions.