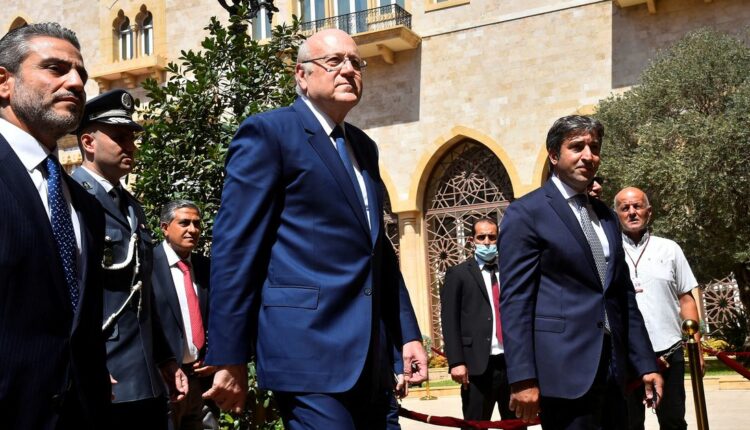 BEIRUT, Sept 23 (Reuters) – In its bid for IMF support, Lebanon must address a question it has evaded since the economy imploded two years ago: how should it distribute the huge losses caused by its financial collapse?

Till now, the answer has been brutally simple: ordinary Lebanese have paid the price as they watched savings evaporate, the currency crumble and basic goods disappear from the shelves.

When a plan was drawn up last year that identified a $90 billion hole in the financial system, it was shot down by banks which complained it made them foot too much of the bill and by the ruling elite who had driven Lebanon into its crisis.

Since then, Lebanon has sunk deeper into trouble with no plan and no government until its fractious sectarian politicians ended a year of bickering and agreed a new cabinet this month.

The new prime minister, billionaire tycoon Najib Mikati, and his government need to acknowledge the scale of losses and work out how to share them out to deliver on a promise to secure International Monetary Fund assistance with economic reforms.

The financial system collapsed in 2019 because of decades of corruption and waste in the state and the unsustainable way it was financed. The trigger was slowing inflows of hard currency into the banking system, which lent heavily to the government.

Mikati may have a better shot in IMF talks than his predecessor partly because there is now broader political recognition – including, it seems, within Iran-backed Shi’ite group Hezbollah – that an IMF deal is the inescapable path to aid.

From crippling shortages of fuel and other basics to a de facto “hair cut” of up to 80% on the value of savings in a zombie banking system, many argue the crisis has inflicted more pain than even the toughest imaginable IMF adjustment programme.

Yet many analysts are deeply sceptical about whether the government can embark on significant reforms, even if it can start IMF negotiations, or fix problems like the fuel shortage.

The government was picked by the same elite that led Lebanon into its mess and allowed it to fester. The World Bank has criticised Lebanon for “a deliberate” lack of policy.

Moreover, the government has just eight months before elections that will preoccupy the main parties.

The World Bank says the depression is one of the most severe since the mid-19th century: gross domestic product shrank by 40% between 2018 and 2020. Even during Lebanon’s 1975-1990 civil war, the banks remained solvent and functional.

Clearing the first hurdle to an IMF deal – agreeing on the distribution of losses – will be tough. Last year’s plan encountered opposition from stakeholders including the banks.

In a report, Goldman Sachs said reaching an agreement on the issue would likely “prove difficult to achieve, representing a critical obstacle along the path to recovery”.

A financial source familiar with the IMF process in Lebanon said there was room for compromise on the losses and significant momentum for an IMF deal, which meant there was a “much higher” likelihood of reaching an agreement.

While some banks still hoped their debts would evaporate by converting U.S. dollar deposits into pounds, the source said banks were more ready to acknowledge the need for “a proper restructuring”.

“We don’t have to turn into Finland or Sweden to conclude an IMF programme,” the source said. “We have to do the minimum required, including acknowledging losses in the banking sector and central bank and agreeing a fair allocation of these losses.”

A capital control law must also be passed and the exchange rates unified, the source added.

The IMF has said it has had courtesy calls with members of the new government and stands ready to engage. read more

The government has said it will renew and develop last year’s plan, which included figures endorsed by the IMF.

That plan had enraged the banks, partly because of provisions for a shareholder bail-in that would wipe out their capital. The banks countered with their own proposals including a $40 billion state asset fund to help settle debts.

Riad Salameh, central bank governor since 1993, also dug in his heels last year over the losses, and lawmakers representing the factions within the ruling elite came up with figures that were between a quarter and a half of the amount in the plan.

The finance ministry and central bank are now expected to work better together to agree on the losses, said Alain Aoun, a senior member of the Free Patriotic Movement, which was founded by his uncle, President Michel Aoun.

“What changed? The team changed,” he told Reuters. “Last year some parties said ‘never touch subsidies’, and look where we are today. Everyone is surrendering progressively to the reforms, whether voluntarily or because they are being forced to.”

“We are desperate to get dollars, the IMF is promising aid, but conditioned to get into a financial plan. Everybody will be forced to (agree) this time,” he said.

But the government faces enormous scepticism.

Its policy programme gave scant detail on major reforms sought by donors, including fixing the state-run electricity sector which has drained the public purse yet still produces barely any power.

“I call this the government of restoration – the government that is supposed to improve the image of the traditional parties ahead of the upcoming elections,” he said, saying it would be able to spend more than $1 billion issued to Lebanon as part of a general allocation of IMF Special Drawing Rights.

“They will stabilise the country and sell that under the name of reforms.”