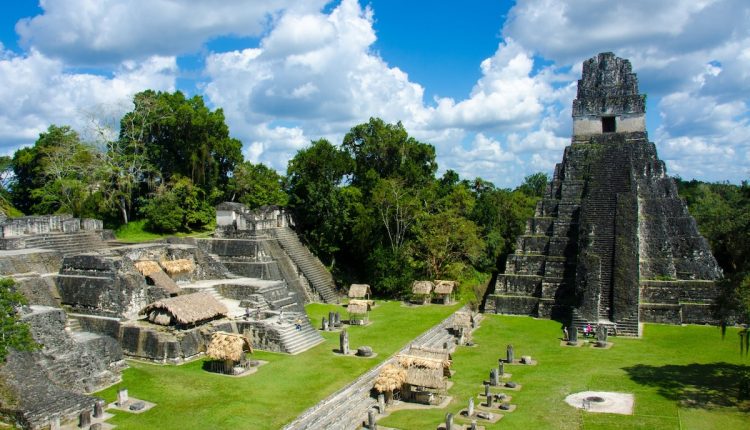 To the naked eye—and on archeologists’ maps—it looked like just another hill amid the undulating landscape of Tikal, the ancient Maya city-state in the lowlands of northern Guatemala. But when researchers zoomed in on an aerial image made with laser scanning equipment called LiDAR (short for “Light Detection And Ranging”), they could clearly see the shape of a human-made structure hidden under centuries of accumulated soil and vegetation.

The building—a pyramid, it turned out—was part of an ancient neighborhood that included a large enclosed courtyard fringed with smaller buildings. But these structures were different from any others known to exist at Tikal. They had the distinct shape, orientation, and other features of architecture typically found in Teotihuacan, the ancient superpower near what is now Mexico City, more than 800 miles to the west of Tikal. On closer examination, the complex appeared to be a half-size replica of an enormous square at Teotihuacan known as the Citadel, which includes the six-level Feathered Serpent Pyramid.

“The similarity of the details was stunning,” says Brown University archaeologist Stephen Houston, who first noticed the features.

A new discovery of a major monument in the heart of Tikal—among the most extensively excavated and studied archaeological sites on Earth—underlines the extent that LiDAR is revolutionizing archaeology in Central America, where thick jungles usually make satellite imagery useless. It also raises a tantalizing question: What would an enclave of distant Teotihuacan be doing in the core of this Maya capital?

Guided by the LiDAR images, Edwin Román-Ramírez, the director of the South Tikal Archaeological Project, began a series of excavations last summer. Tunneling into the ruins, his team discovered construction and burial practices, ceramics, and weaponry typical of early fourth-century Teotihuacan. From an incense burner decorated with an image of the Teotihuacan rain god to darts made from green obsidian from central Mexico, the artifacts suggest that the site could have been a quasi-autonomous settlement at the center of Tikal, tied to the distant imperial capital.

“We knew that the Teotihuacanos had at least some presence and influence in Tikal and nearby Maya areas prior to the year 378,” says Román-Ramírez. “But it wasn’t clear whether the Maya were just emulating aspects of the region’s most powerful kingdom. Now there’s evidence that the relationship was much more than that.”

Thomas Garrison, a geographer at the University of Texas-Austin who specializes in using digital technology for archaeological research, says that the findings demonstrate how, in some ways, the ancient cities of the Americas may not have been so different from cosmopolitan cities today. “There was a melting pot of cultures and people with different backgrounds and languages co-existing, retaining their identities.”

The research is sponsored by the PACUNAM LiDAR Initiative, which produced breakthrough findings in 2018 revealing a vast, interconnected network of ancient cities in the Maya lowlands that was home to millions more people than previously thought.

Román-Ramírez cautions that the findings do not definitively prove that the people who built the complex were from Teotihuacan. “But what we’ve found suggests that for more than a century people who were at least very familiar with Teotihuacan culture and traditions were living there in their own colony, a sector distinct in identity and practicing the religion of Teotihuacan.” A pending isotopic analysis of bones found in a burial chamber may provide more certainty by pinpointing where the deceased lived at different times during their lifetime.

Based on ceramic styles found in the ruins, the team estimates that construction at the site commenced at least 100 years before 378, a pivotal date in Maya history. According to Maya inscriptions, Teotihuacan’s king sent a general known as Born of Fire to topple Tikal’s king, Jaguar Paw, and installed his young son as its new ruler. Born of Fire arrived at Tikal on January 16, 378, the same day that Jaguar Paw “entered the water”—a Mayan metaphor for death.

After the takeover, Tikal flourished for several centuries, conquering and pacifying nearby city-states and spreading its culture and influence throughout the lowlands. Tikal’s hegemony during this period is well-documented, but what remains unknown is why, after decades of friendly coexistence, Teotihuacan turned against its former ally.

Further excavation at Tikal may generate more insight, but a recent discovery in Teotihuacan suggests that some sort of cultural collision may have sparked the fatal falling-out. A team led by Nawa Sugiyama, an archaeologist at the University of California, Riverside, uncovered a “Maya barrio” at Teotihuacan that mirrors the Teotihuacan outpost at Tikal. The collection of luxurious buildings was decorated with lavish Maya murals, suggesting that the residents may have been elite diplomats or noble families.

But just before the conquest of Tikal in 378, the murals were smashed to pieces and buried. That, and a nearby pit filled with shattered human skeletons, imply an abrupt turn from diplomacy to brutality.

“What went wrong in that relationship that you have a bunch of elite Maya residents being slaughtered, their palaces smashed, all their stuff removed, and then their homeland invaded and taken over by a child king?” asks Francisco Estrada-Belli, a Tulane University archaeologist. “Clearly we’re zeroing in on some really important turn of events in the Maya-Teotihuacan story—and one of the grand mysteries of Central America is a few steps closer to being solved.”