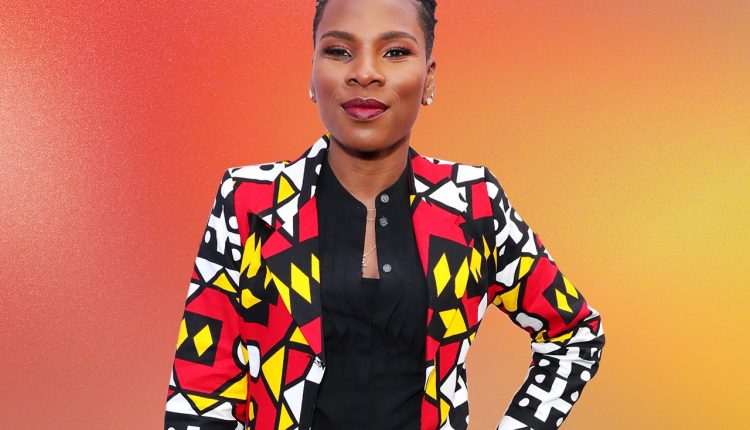 Ask Yourself This Before You Do Something Scary

The vast majority of us, at some point, have experienced fear. It crops up in insidious ways—maybe your heart starts racing and your breathing gets shallow. Maybe a thought that you barely remember pops into your mind, and your stomach drops into your toes. Most of us know exactly how fear feels, and for better or worse, we have a pretty good idea of how it holds us back. So, during a global pandemic when fear seems like common sense, we’ve decided to chat with someone who, quite literally, wrote the book on coping with this emotion.

“I’ve seen my life transform when I insist on doing what was scary because I felt compelled to do it,” Luvvie Ajayi Jones, speaker, podcast host, and best-selling author, tells SELF. Her new book, Professional Troublemaker: The Fear-Fighter Manual ($23, Amazon) aims to help the rest of us interrogate how fear holds us back in all aspects of our lives, from work to love to friendships. “I’m hoping that this book gives people permission—through my story to my grandmother’s story—to make trouble in their own lives,” she explains.

Below, Luvvie Ajayi Jones opens up about what she’s learned from facing fear, including during a global pandemic.

SELF: Can you take me back to when you decided that Professional Troublemaker was your next book?

Ajayi Jones: I have been speaking about fear for years, but I didn’t realize it. I even turned giving a TED Talk down—where I talked about fear—twice before I finally said yes. I was afraid that I wasn’t ready. I was scared that I didn’t have the time for it or that I would bomb. A friend of mine, Eunique Jones Gibson, caused me to say yes. I said, “I’m afraid that I’m going to bomb.” And she loaned me courage that I didn’t have.

I’ve gotten thousands of emails over the years from people who said the TED Talk made them take action. It proved to me that we spend a lot of time making decisions through the lens of fear. And it stops us from doing what we’re supposed to do. It makes us say “no” to “yes” opportunities.

SELF: Was there fear involved in putting your thoughts on paper during the pandemic?

Ajayi Jones: There was absolutely fear involved. I had to write this book when the world shut down. That was petrifying. The world was like, “Yeah, we have this pandemic that we’ve never seen before.” And here I was writing a book about fighting fear. So it was a personal, a professional, and an emotional challenge.

SELF: What did that look like—say on a random day last March?

Ajayi Jones: You know how it feels when you’re supposed to do something, and you don’t feel right until you do it? That’s what it felt like. So even as I was procrastinating, sitting on my couch, and being afraid, I knew I had to do it.

It was very meta to write during that really fearful time. But living in a world where we couldn’t leave our houses because it was dangerous put other fears in perspective. The same thing that keeps us from jumping off of a cliff without a parachute, or from going outside without a mask, is the same thing that tells us, “Oh, don’t ask for that job promotion. Don’t challenge a system that feels unjust.” So the pandemic really gave me the chance to see that it’s not silly that we’re afraid, but that we must be clear: We’re not always in danger when we’re uncomfortable.

SELF: Do you have any advice for how we can discern between being in danger and feeling uncomfortable?

In those moments when you are afraid, put it on paper. What is the thing that you’re afraid of? What is the worst thing that can happen? Write that down to see—if that thing happens—is your life destroyed? How catastrophic is it going to be for you?

SELF: So often, at the core of fear, is the notion that you won’t survive.

SELF: Yeah, often marginalized people are the ones who have to speak truth to power. As someone that is always speaking up, how do you care for yourself?

Ajayi Jones: Sometimes I just crash. I will just, like, run, run, run and then disappear to go recharge because I am an introvert. I’m a huge fan of candles. I always have a candle lit in my house because I want it to just smell good.

My self-care also looks like sometimes saying, “No.” Saying no is a big form of self-care for me because I can stretch myself quickly. So it is a constant struggle. I sometimes have to schedule self-care.

SELF: Has there ever been a time where you didn’t speak up, or you let fear win?

Ajayi Jones: You know, it’s less about me even speaking up, but about being honest with myself. I’ve been blogging for 18 years. I started in college, and when I graduated I deleted that blog. I started AwesomelyLuvvie.com to talk about the world as I see it now. I had a full-time job in marketing, and I really loved it. I kept writing, but I would just say, “Oh, I’m a blogger.” I was afraid to call myself a writer because it felt too big. So a lot of our fears don’t just show up in the moments when we need to say something. Sometimes they show up in the moments when we need to own who we are.

In 2012, I got credentialed to do press coverage at the Academy Awards. And here I am on the red carpet and backstage with journalists from CNN and NBC. And there’s me: Awesomely Luvvie. And my words got me in that room. I think that’s when I finally was like, Ma’am. You are out of excuses. You’re a writer.

SELF: That makes a lot of sense.

Our fears look different. One person might be really bold as a speaker in rooms, but are they telling themselves the truth? They might be bold on social media, but are they talking to their friends and telling the truth at home? We have to ask ourselves: How is fear showing up in our lives, how do we use it, and how is it stopping us from being the person we’re supposed to be?

SELF: What is one thing that you think we, as a culture, don’t hear enough when it comes to fear and bravery?

This conversation has been edited and condensed for clarity.

33 Kitchen Gadgets That Chefs Actually Use and Love