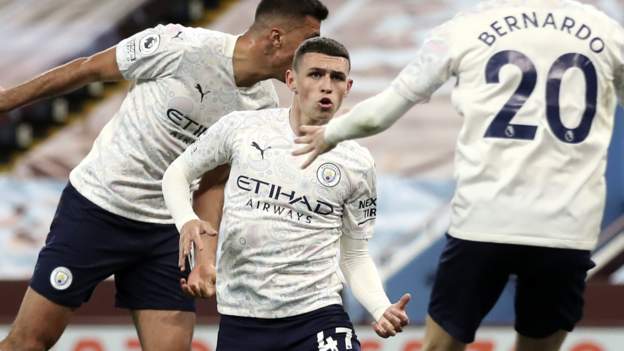 Only Kevin De Bruyne (24) has been directly involved in more goals in all competitions for Manchester City this season than Phil Foden (23 – 14 goals, nine assists)Manchester City boss Pep Guardiola said the failed European Super League (ESL) was a “closed chapter” after his side beat Aston Villa to move closer to becoming Premier League champions.

City were one of 12 clubs to sign up to the breakaway ESL on Sunday, but withdrew on Tuesday after widespread criticism of the proposals, which would have seen no promotion or relegation and a split in English football.

“As a club we accept and learn and focus on the reason why we’re here,” said Guardiola, whose side need eight points from five matches to become English champions for the third time in four seasons.

“It’s a chapter which is over, a closed chapter. They [the owners] don’t need to apologise [to me], I know them, I know how they are.”

City’s win leaves them 11 points clear of Manchester United with Guardiola saying his side were “so close” to the title.

However, they had a scare when centre-half John Stones was sent off just before the break for a knee-high challenge on Jacob Ramsey.

But Villa wasted the man advantage when Matty Cash was dismissed 11 minutes into the second half following two bookings in the space of three minutes.

The hosts had earlier gone ahead after only 20 seconds as John McGinn guided a shot past Ederson following Ollie Watkins’ low cross.

The impressive Phil Foden finished off a fine City team move to equalise before Rodri headed what proved to be the winner following Bernardo Silva’s cross.

City led 2-1 when they went down to 10 men, but Villa could not capitalise on the extra player and then offered little threat when it was 10-a-side.

Relive Aston Villa v Manchester City as it happened, plus reaction and analysisListen to the latest Football Daily podcastA bad day for Stones, but his red does not cost City’We are so close to title’ – Guardiola on Man City’s win over Aston VillaStones has been in fine form this season, making more Premier League appearances than he managed in 2019-20, with his performances earning an England recall after 16 months out of the national side.

However, with Three Lions boss Gareth Southgate in the stands, it was an evening to forget for the 26-year-old.

He was caught out in the first few seconds of the match when he failed to collect a long ball from England team-mate Tyrone Mings, enabling Watkins to set up McGinn for the joint quickest Premier League goal of the season.

Stones was then shown a straight red card for a reckless challenge on Ramsey near the halfway line and in front of the two dugouts.

After a check by the video assistant referee Jarred Gillett, on-field referee Peter Banks watched the incident on a pitchside monitor and showed the red card to Stones, although Guardiola was unhappy with the decision and remonstrated with the officials.

Stones will be suspended for Sunday’s Carabao Cup final against Tottenham at Wembley as City, who are also in the Champions League semi-finals, aim to pick up the first of a potential three trophies this season.

With a man advantage, Villa’s Douglas Luiz curled a 25-yard effort straight at Ederson but the match swung back in City’s favour following two Cash challenges on Foden, the second of which was a sliding challenge that wiped out the England midfielder close to the touchline.

From then on City were able to dominate possession and now only need three more league wins to become English champions for the seventh time in their history.

Foden shines as football returns to normalThe build-up to the match at Villa Park had been dominated by talk of the European Super League.

City were one of six English teams – along with Arsenal, Chelsea, Liverpool, Manchester United and Tottenham – to join three sides from Spain and three from Italy in the proposed new closed competition.

However, Sunday’s announcement, brought widespread criticism and anger from fans, managers, other clubs and politicians, with Guardiola himself saying football “is not a sport if success is guaranteed or if it doesn’t matter when you lose”.

City were one of the first to announce their withdrawal from the ESL on Tuesday evening and there was no repeat of the protests that had seen angry fans demonstrating before Liverpool’s match at Leeds on Monday, Chelsea’s home game versus Brighton on Tuesday and Tottenham’s encounter with Southampton earlier on Wednesday.

This was a game that again highlighted the exciting and thrilling nature of the Premier League and City’s play after going a goal behind was a joy to watch.

Their equaliser started with goalkeeper Ederson knocking a fine 50-yard ball to the left wing where Olexandr Zinchenko played it to the superb Foden. The 20-year-old drilled a low pass to Riyad Mahrez and the Algerian released the overlapping Silva on the right flank and his pull-back was steered into the net by Foden.

The second goal was another well-worked one as Rodri powerfully headed in from another Silva assist.

Not only have City scored the most goals in the Premier League, they also have the best defensive record and successfully managed to stifle Villa in the second half to take a big step towards another title.

After the match, City boss Pep Guardiola said of Foden: “This guy is growing. His influence in our games is massive. He’s becoming a serious player.

“Phil right now is becoming such an important player. His influence in the final third is so important.”

‘They schooled us’ – what they saidAston Villa boss Dean Smith, speaking to BBC Match of the Day: “We made a great start. It was something we had spoken about. We have one of the best players in the league who can run in behind the oppositions defence in the shape of Ollie Watkins.

“We defended reasonably well. It was probably the manner of the goals we conceded that was most disappointing. Cashy will learn from that. The second [booking] was stupid and reckless.

“Some of Manchester City’s play play was outstanding. They schooled us at times.

“I’ve been involved in professional football for 34 years and I haven’t seen football come together like it has this week. That shows you how outraged people were at the [ESL] plans.”

On John Stones’ red card: “He’s late but the intention to kick him is not there, he wouldn’t go there with intention, he’s not aggressive with the feet, he’s just late. It’s tough, playing a lot of minutes, good learning for him. Even with 10 men we played good, when we had the ball we played good.”

On distraction of Super League: “After that game it doesn’t look like it did distract us, we were focused, of course everyone was concerned, but the players were focused on this game. We are so close. Cup final and Champions League and then Crystal Palace.”

Another away win for Manchester City – the statsManchester City have won each of their last 10 Premier League away games, becoming the first team to win 10 in a row on the road in the competition on more than one occasion (won 11 in a row between May-December 2017). Aston Villa boss Dean Smith has lost all five games against Man City during his managerial career – the most games he has managed against a single opponent losing 100% of those matches.Villa have lost nine of their last 11 Premier League games against the league leaders, with those defeats coming by an aggregate score of 24-6. City won a Premier League game having conceded the first goal for the first time since December 2019 versus Leicester (3-1), ending a run of 10 games without a win when conceding first (drew three, lost seven).City’s Bernardo Silva has provided more Premier League assists in 2021 than any other player so far in this period (six – twice as many as the Portuguese assisted throughout 2020 in the top-flight (three). City’s John Stones was been sent off for the first time in his Premier League career, in what was his 182nd appearance in the competition. It was only the sixth foul he had conceded in the league in 20 games this season.No player has scored more goals in all competitions before turning 21 for Pep Guardiola than Manchester City’s Phil Foden (29 – level with Bojan). Villa’s John McGinn’s goal after 20 seconds was the second quickest goal Manchester City have conceded in Premier League history, after Alan Shearer’s for Newcastle United after 10 seconds in January 2003. What’s next?City play Tottenham at Wembley in the Carabao Cup final on Sunday (16:30 BST), before Villa take on West Brom in a Premier League match later that day (19:00).

Attempt missed. Bernardo Silva (Manchester City) left footed shot from outside the box is too high. Assisted by Riyad Mahrez.

Kyle Walker (Manchester City) wins a free kick in the defensive half.

Rodrigo (Manchester City) wins a free kick in the defensive half.

Attempt missed. Ilkay Gündogan (Manchester City) right footed shot from outside the box is just a bit too high from a direct free kick.

Kyle Walker (Manchester City) wins a free kick in the attacking half.

Tyrone Mings (Aston Villa) wins a free kick in the defensive half.

The dark side of betting: Meet the man who stole millions from work to sustain his gambling habit’Food is more than calories’: Different strategies to help you achieve a healthy weight