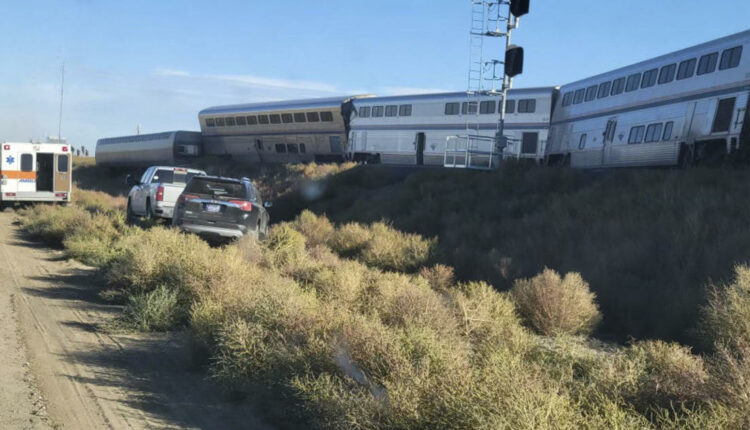 An Amtrak passenger train derailed near Joplin, Montana, on Saturday, killing at least three people, officials said. As of Sunday evening, five people were still hospitalized in stable condition, Montana Governor Greg Gianforte said at a press conference, adding that all others who needed medical attention have been released.

“At approximately 4 p.m. MT on Saturday, Sept. 25, Empire Builder train 7/27, traveling westbound from Chicago to Seattle/Portland, derailed operating on BNSF tracks near Joplin, MT. There were approximately 141 passengers and 17 crew members onboard,” Amtrak said Sunday in a statement.

According to Amtrak, eight of the train’s 10 cars derailed. The train also had two locomotives, the company said.

Photos from the scene showed at least one car tipped over on its sides. Carrie Schoeffling, a passenger who was riding in the fourth car, told CBS News that the car she was traveling in derailed, but did not tip over. Schoeffling said that she heard a boom, after which the carriage began “pitching violently side to side” before derailing.

In this photo provided by Kimberly Fossen an ambulance is parked at the scene of an Amtrak train derailment on Saturday, Sept. 25, 2021, in north-central Montana.

About 60 passengers spent the night at nearby Chester High School in Chester, Montana. All passengers not receiving medical treatment had been transported out of Chester on Sunday, Gianforte said.

Another passenger, Andrew Sivula, was stuck in one of the cars that detached from the train.

“I heard a loud bang and then the cars tipped,” he told CBS News’ Meg Oliver.

Sivula and other passengers worked with first responders using ladders to reach people trapped inside the overturned cars.

Passenger Wayne Freed told CBS News that he was changing cars when the derailment happened. He survived by grabbing a table bolted to the floor.

“The train tipped about 45 degrees,” Freed said. “I thought it would stop. I hate to think what would have happened if I hadn’t been able to hold on.”

It was not immediately clear what caused the derailment. The section of track where the derailment occurred was last inspected on September 23, according to officials. The National Transportation Safety Board has sent a team to investigate, the board announced.

Gianforte said that the derailed cars cannot be cleared off the line until the NTSB finishes its investigation. “When we get the all clear from NTSB, BNSF has assured me they can get the line up and running in short order, but we need to make sure we know what happened first,” he said. The governor said these types of investigations are typically completed in fewer than 10 days.

Montana Attorney General Austin Knudsen said in a statement that members of Montana Highway Patrol were assisting with rescue efforts. “We are praying for the safety of all passengers and crew who were on board,” Knudsen said.

Amtrak CEO Bill Flynn said in a statement on Sunday that the company is “fully cooperating with the investigation, working closely with National Transportation Safety Board, the Federal Railroad Administration, local law enforcement and response agencies.”

“We share the sense of urgency to understand why the accident happened; however, until the investigation is complete, we will not comment further on the accident itself,” Flynn said. “The NTSB will identify the cause or causes of this accident, and Amtrak commits to taking appropriate actions to prevent a similar accident in the future.”

Flynn added that Amtrak has sent “emergency personnel and Amtrak leadership to the scene to help support our passengers, our employees and their families with their needs.”

The Empire Builder operates between Chicago and Seattle.

Errol Barnett and Savannah Sinfield contributed to this report.