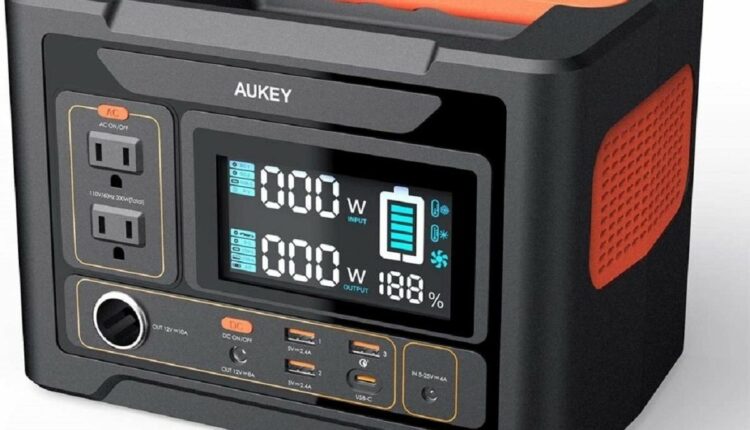 I’ve reviewed a lot of Aukey products, but never had the chance to test out one of the company’s power stations. So a few months ago, I reached out to the Aukey team and asked to check out the $250 PowerTitan 300.

This power station offers enough ports to connect and power almost anything you can think of, and it’s not terribly expensive. Additionally, Aukey sells a 100W solar panel kit that you can use to charge the PowerTitan or small devices, like your phone or tablet, when you have a clear sky.

Note: This review is part of our roundup of portable power banks. Go there for details on competing products and our testing methods.

There were two aspects about the design of the PowerTitan 300 that I noticed right away. First was the 4-inch display that shows the current wattage going in and out of the station, the charge level, and which of the various ports are currently powered on. The second thing I noticed was the number of ports.

There are two 110V outlets, a 12V car charger port, a DC output port, two 5v/2.4a USB ports, another USB port with QC 3.0 speeds, and a single USB-C port with 60W Power Delivery. A second DC port is used for charging the station at up to 75W. Each section of ports has a button you press to turn those connections on, which in turn lights up an indicator on the screen so you can quickly see which ports are active.

The housing is made up of black plastic with sections of orange for accent. It looks a lot like the color scheme  Jackery uses for its power stations. The built-in orange handle on top of the PowerTitan 300 feels sturdy, as does the rest of the construction.

Using the included power adapter, it took 6 hours and 9 minutes to charge the station at 57W. That’s a little longer than the 5.5-hour estimate listed on Aukey’s website. However, when it came to charging the PowerTitan using Aukey’s PowerHelio Y100 solar panel, the charging process was excruciatingly slow. Over two hours in direct sunlight, the solar panels added just 5 percent worth of a charge to the PowerTitan 300. At that rate, it would take around 40 hours of direct sunlight to fully charge the PowerTitan.

Aukey’s website claims it should take 5 hours to charge the station with the solar panels. I’ve reached out to Aukey to see if there’s a reason for the discrepancy, however this aligns with my testing of other solar panels. One day they’re able to provide plenty of energy to a power station, and the next day everything slows to a crawl. It’s also worth noting that Aukey no longer lists any solar panels for sale on its website—I have not heard back from the company about this.

To test how efficient the power station is, I connected a PortaPow power monitor and DROK load tester to a standard USB port and let the battery completely empty. Over the course of a few days, the battery’s output was measured with a total of 271.98Wh. That’s an efficiency rating of over 94 percent, which is the highest efficiency of all the power stations I’ve tested thus far. The closest station to that number is the RavPower Portable Power Station 252.7Wh Power House.

As an additional test, I connect a 4W desk lamp to the station and use a Wyze Cam to create a timelapse. I’m then able to see how long the lamp remains powered on. The PowerTitan 300W kept it lit up for 35 hours and 44 minutes.

The Aukey PowerTitan 300 is my favorite power station out of the lot that I’ve tested thus far. At least in the sub-$300 price range. The big, bold display is easy to see, even from across the room. It’s highly efficient, and has enough ports and charging options to power almost anything you’d need (assuming it draws under 300W, that is). And at $250, it’s a heck of a good deal.

Based in beautiful Colorado, Jason Cipriani is a freelance writer who contributes to, Greenbot, IGN, TechRadar, ZDNet and CNET.

End of furlough brings uncertainty for UK jobs and economy