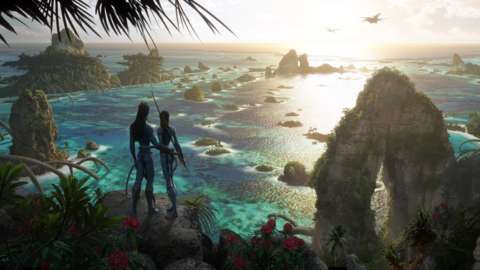 Last updated Oct 16, 2020
0
Share
The production of two sequels to 2009’s Avatar has turned into a far longer saga than originally anticipated, but some progress is now being made, according to James Cameron’s latest update. The director has said that live-action filming is now complete on Avatar 2, and about “95% complete on Avatar 3.”

The Oscar-winning filmmaker gave the update in a conversation with Arnold Schwarzenegger for the latter’s Austrian World Summit environmental conference, as picked up by CinemaBlend. James Cameron has directed Schwarzenegger three times before, in Terminator 1, 2, and True Lies.

“We’re down in New Zealand shooting,” Cameron told Arnie in his update on the films’ progress. “We’re shooting the remainder of the live action. We’ve got about 10% left to go–we’re 100% complete on Avatar 2 and we’re sort of 95% complete on Avatar 3.” He goes on to mention how lucky the Avatar team was that they had already chosen to shoot in New Zealand, one of the first countries in the world to mostly clear itself of COVID-19 cases.

While performance capture filming was already complete as of 2018, and the live-action filming is set to wrap up soon, it’s likely a large part of the workload on Avatar 2 and 3 will be in digital post-production work.

Cameron has delayed Avatar 2 another full year, pushing its release date back from December 2021 to December 16, 2022. “That doesn’t mean that I have an extra year to finish the film,” Cameron explained in the interview. “Because the day we deliver Avatar 2, we’ll just start working on finishing Avatar 3.”

While we don’t have too many details on the plot of Avatar 2 yet, we know it will continue to follow Jake Sully, Neytiri, and their children as they explore new parts of Pandora.