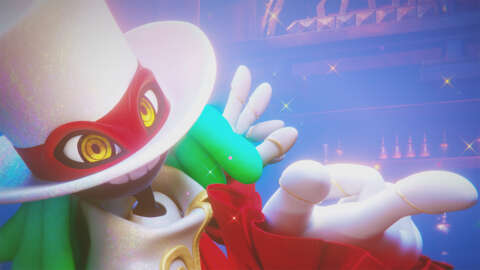 We got some early hands-on time with the upcoming demo of Square Enix’s whimsical platformer.

Despite its reputation as an RPG factory, Square Enix has dabbled in numerous other genres in the past, but Balan Wonderworld is one of the publisher’s biggest departures in recent memory. The brainchild of former Sonic producer Yuji Naka and his new team, Balan Company, Balan Wonderworld is a kaleidoscopic platformer rife with collectables. It’s a far cry from Square Enix’s traditional output, but there are glimmers of potential here–as well as some causes for concern.

We had a chance to play an early access version of the upcoming , which features four levels across three worlds and one early boss battle. Almost from the outset, faint traces of Naka’s previous series could be felt in Balan Wonderworld. As in Sonic, worlds are broken up into separate “acts,” and one of the game’s costumes even gives you the ability to unleash a Sonic-like mid-air lock-on attack.

Despite these initial similarities, however, Balan Wonderworld is by and large a more methodical sort of platformer, emphasizing exploration and item collection over the fast-paced, high-flying spectacle found in Sonic the Hedgehog. The game’s signature hook is its vast array of costumes. Each one you collect grants a different power; one costume, for instance, lets you perform a tornado jump that can destroy certain blocks and repel tornado attacks back at enemies, while another lets you float through the air and ride updrafts.

These costumes are integral in exploring Balan Wonderworld’s different stages. Many areas of a level can only be accessed by donning a specific outfit; wear the Gear Prince costume, for example, and you can rotate clockwork levers, opening certain doors or moving elements of the scenery into place. Other costumes were used to similar effect, and the best moments in the demo involved acquiring a new ability and using it to reach a previously inaccessible area, illustrating the potential this idea holds.

Your objective in each act is to ultimately navigate the stage and reach the goal at the end, picking up various collectibles along the way. The most important of these are the Balan Statues, which function as Wonderworld’s equivalent of Mario’s Power Stars. Snag enough statues and the game’s hub area will gradually unfurl, unlocking new worlds for you to explore.

Although only three worlds were accessible in the demo, each felt distinct and were tailored around different costume abilities. The first world in particular–an abstract farmstead dotted with haystacks, overgrown ears of corn, and giant watering cans–employed a neat visual effect. In Act 1, the terrain would rise and come into view as you approached, while in Act 2, it would unroll before you, adding to the dream-like atmosphere of the game.

The visuals and aesthetic of Balan Wonderworld offer a lot of charm, but the actual platforming itself when exploring these worlds felt like the weakest aspect of the demo. Your character runs very slowly, and they have poor traction, which makes movement feel somewhat slippery. Jumping also lacks a feeling of momentum, and juggling costumes can be a bit cumbersome. You can have up to three different outfits at your disposal at once and swap between them with a press of a shoulder button, but any additional costumes you pick up after that will replace one in your inventory. Thankfully, pads that let you access a dressing room (where you can swap out costumes) are sprinkled throughout the stages in the demo, but you’ll still often need to retrace your steps to reach these.

Moreover, the costumes you acquire aren’t permanent. Much like the power-ups in Mario, you’ll lose your current costume if you fall into an abyss or are struck by an enemy, which means you’ll need to either find that costume again or hoof it back to a dressing room and equip a spare one. This wasn’t much of an issue in the demo, as costumes seemed fairly plentiful in the available stages, but some outfits are only available in specific worlds–meaning if you return to an earlier level with a new costume in tow to collect a previously unreachable Balan Statue and end up losing that outfit, you’ll be out of luck unless you have a backup.

That said, the Balan Wonderworld demo represents a small, work-in-progress sample of the project, so it remains to be seen if these issues will persist in the final game. There’s a solid foundation for a novel and enjoyable platformer here, so long as Square and Balan Company are able to fine-tune the gameplay issues in the demo. Balan Wonderworld launches for PS5, Xbox Series X/S, PC, Nintendo Switch, and last-gen consoles on March 26, while the free demo goes live on each platform on January 28.