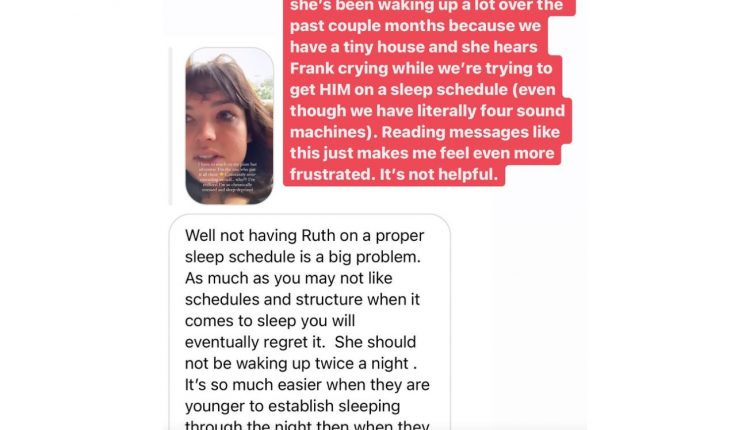 Not here for the haters. Bekah Martinez fired back after a “rude” Instagram troll criticized her for not putting her 23-month-old daughter, Ruth, on a “proper sleep schedule.”

The Bachelor alum, 25, revealed via social media on Monday, January 4, that she had enrolled in her final semester at the University of California Irvine after “a slow, hard eight-year journey” to getting her degree. She initially attended the college in 2013 to pursue a Bachelor’s of Fine Arts, but eventually needed to “hit the refresh button” and change her path.

While discussing the rigorous schedule she’s balancing now that she’s back at school, Martinez said in an Instagram Story that “neither of the babies are sleeping through the night right now.” The “Chatty Broads” podcast host shares Ruth and 6-month-old son Franklin with her boyfriend, Grayston Leonard. Though the former reality star credited her lack of sleep to “constantly overextending” herself, one commenter claimed it was due to bad parenting.

“As much as you may not like schedules and structure when it comes to sleep, you will eventually regret it,” the troll responded in a DM, which Martinez later posted on her Instagram Story. “[Ruth] should not be waking up twice a night. It’s so much easier when they are younger to establish sleeping through the night [than] when they are older.”

The California native was quick to clap back, reminding her followers that unwanted messages about her parenting are “not helpful.”

“I know this is well-intentioned but it’s rude and unprompted,” Martinez wrote. “She DOES have a sleep schedule we established well over a year ago but she’s been waking up a lot over the past couple [of] months because we have a tiny house and she hears Frank crying while we’re trying to get HIM on a sleep schedule (even though we have literally four sound machines).”

Martinez is no stranger to facing mom-shaming head-on, especially when it comes to her choice to continue nursing both her babies and share breast-feeding selfies. While speaking with Us Weekly exclusively in December, the Bachelor Nation member admitted that it “really bothers” her to receive those types of negative comments.

“It makes me angry that there are people out there that think it’s OK to tell people what to do with their bodies or how to parent,” she explained at the time. “If children are safe and loved and taken care of, I don’t think it’s really your business to comment on how people are doing their journey.”