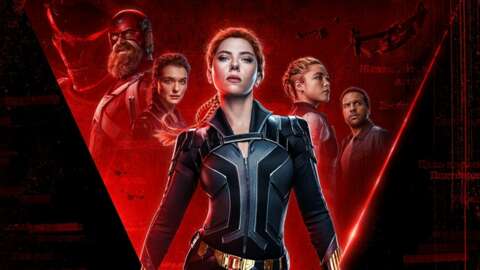 If you watch comic book movies at all, chances are you’ve seen dozens of interviews with stars of the dozens of Marvel Studios films and noticed how tight-lipped they are (except Tom Holland and Mark Ruffalo). Even the people writing the films are often kept in the dark about certain this, revealed Black Widow writer Eric Pearson in a new interview with The Hollywood Reporter. Spoilers follow for Black Widow’s post-credits sequence.

As with so many other Marvel Studios films, Black Widow ends with a post-credits sequence that drops clues for what’s next in the MCU. In a scene set after the events of Avengers: Endgame, Natasha Romanoff (Scarlett Johansson)’s adoptive sister Yelena Belova (Florence Pugh) mourns her sister at her grave site, only for her quiet moment to be interrupted by Valentina Allegra de Fontaine (Julia Louis Dreyfuss) blowing her nose to cartoonish effect. Val then hands Yelena the photo of her next target: Jeremy Renner’s Clint Barton, aka Hawkeye.

“I felt bad,” Person said. “They told me I got to [write the post-credits scene], so I was really excited I got to do a lot to shape Valentina’s personality, but they told me ‘and then at the end, this is the target.’ They were like, ‘Don’t worry about it. You don’t have to know that.’ I was like, ‘Who am I screwing over? Something is going on! I don’t have an answer for this!'”

And it isn’t because Pearson is the new kid in the MCU. In addition to writing Black Widow, he co-wrote Thor: Ragnarok and worked as a writer and story editor on ABC’s Agent Carter series.

Pearson didn’t get his answer, though. “They were like, ‘You don’t need to. We are going to figure that out.’ I remember writing it and feeling super guilty. ‘I hope whatever writer is working on this next chapter is going to be okay with what I’ve done to them.'”

The interview covers a bunch more ground about the process of writing the film, including scenes that Pearson himself had to act out with the other actors, the pronunciation of a certain European city, and working with Scarlett Johansson as the first MCU star to executive produce their own film, and is well worth the read.