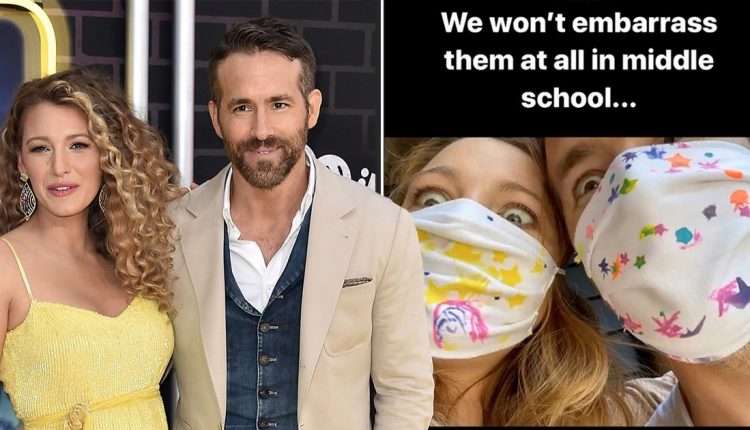 Blake Lively and Ryan Reynolds joked about being ’embarrassing’ parents, as they proudly wore face masks designed for them by their three daughters.

The Hollywood couple are parents to three girls; James, five, Inez, three, and Betty, 10 months, who was born in October last year, and decided to give the trio creative control when it came to jazzing up their face coverings.

Celebrities have been urging fans to mask up during the coronavirus pandemic in a bid to control the spread of Covid-19 and Blake ensured that her family were following suit.

She kitted out herself, Ryan and their daughters with masks that you can decorate yourself and let her kids design both hers and Ryan’s mask for them.

The result? Some pretty snazzy star designs and a lot of colour.

Of course, Blake and Ryan made sure to model the finished masks, with the Gossip Girl actress, 32, sharing a funny selfie of the pair with fans on Instagram.

Ever her funny self, Blake captioned her post: ‘We won’t embarrass them at all in middle school.’

Her post comes after Blake and Ryan finally revealed their youngest daughter’s name, with the couple allowing Taylor Swift to make their little girl’s moniker public in her track Betty from her new album Folklore.

In the track, Taylor name-drops all three of Blake and Ryan’s kids at different parts in the song.

Obviously, the song itself is named after Betty, with lyrics including: ‘You heard the rumors from Inez/You can’t believe a word she says,’ and ‘she said “James, get in, let’s drive”/Those days turned into nights.’

Taylor, who is good pals with Blake and Ryan, revealed the song is written from the perspective of a 17-year-old boy who lost the love of his life.

Revealing where she got the names that inspired the characters in the song, Taylor told Country Radio: ‘I’ve always loved that in music you can kind of slip into different identities, and you can sing from other people’s perspectives. So that’s what I did on this one.

‘I named all the characters in this story after my friends’ kids.’