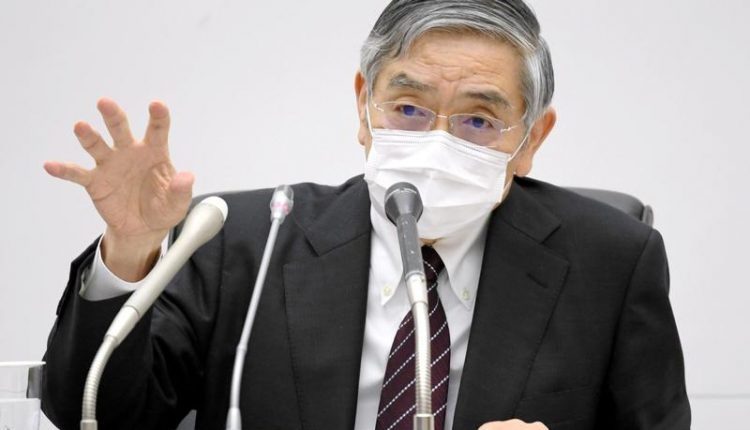 TOKYO (Reuters) – Bank of Japan (BOJ) Governor Haruhiko Kuroda on Tuesday offered a cautiously optimistic view of the economy, saying global and Japanese growth are picking up from the damage caused by the coronavirus pandemic thanks to aggressive stimulus measures.

Speaking at a seminar, Kuroda said Japan’s economic growth will be “clearly positive” in the country’s new fiscal year, beginning in April, thanks to solid global trade and domestic demand for durable goods.

“The global economy is rebounding, a move that is also seen in Japan’s economy,” Kuroda said. “The recovery in the U.S. economy is positive both for Japan and global growth.”

But Kuroda stressed the BOJ’s resolve to maintain its massive stimulus and take additional easing steps “without hesitation” if risks derail Japan’s recovery.

“We will closely monitor markets as well as overseas and domestic economic developments, as various uncertainties remain on the impact of the COVID-19 pandemic,” Kuroda said.

The upbeat comments come in the wake of the BOJ’s decision earlier this month to make its policy tools more sustainable as the pandemic prolongs the battle to meet its long-distant 2% inflation goal.

Among the purposes of the review was to mitigate the rising cost of prolonged easing, such as the strain ultra-low interest rates inflict on financial institutions’ margin.

Critics of Kuroda’s radical policies have called on the BOJ to ditch its 2% inflation target and start focusing more on addressing the damage of low rates to Japan’s banking system.

“Price stability can be pursued with monetary policy, while a sound financial system can be achieved with macro-prudential tools,” Kuroda said, signalling the BOJ won’t dial back stimulus just to mitigate the side-effects on banks.

After rebounding from the initial hit of COVID-19, Japan’s economy is seen suffering a contraction in the current quarter due to weak consumer demand.

The outlook remains uncertain, though analysts expect solid exports to make up for some of the weakness in domestic consumption.

The BOJ will release new quarterly economic growth and inflation forecasts at its next rate review on April 26-27.

Very hard for US to meet initial refugee goal this year, Blinken says