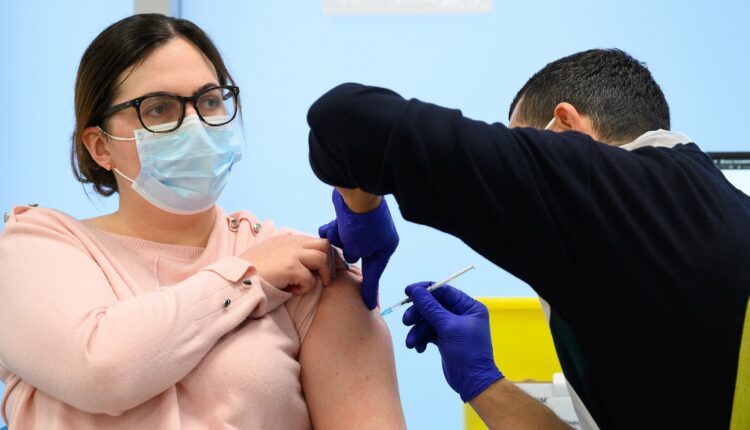 All British adults could be offered a booster jab within weeks, as experts consider opening third jabs up to all over 18s.

A decision from the Joint Committee on Vaccination and Immunisation (JCVI) on expanding the programme and cutting the gap to a booster after second doses could come as early as Monday.

It is expected to mean that millions more people will be offered boosters under emergency measures to limit the spread of the new Omicron variant.

JCVI deputy chairman Professor Anthony Harnden branded extending the age range for boosters and reducing the gap between second and third doses ‘a sensible strategy’, in a seemingly significant hint at the likely decision.

He told BBC Radio 4’s Broadcasting House that adults aged 18 to 39 should expect third jabs to be offered to them ‘earlier than we had previously envisaged’.

Currently, Brits must wait six months from their second dose to get a booster – but that may be shortened to five.

However, doing so overnight – particularly if the under 40s become eligible too – could pose logistical problems, with millions more people suddenly able to book a third jab.

And many experts have long suggested that people in the developing world – many of whom have not had a single vaccine are in far greater need than double jabbed Brits.

The JCVI is also considering whether second doses should be offered to 12- to 15-year-olds.

Whitehall sources were hopeful that the announcement may come on Monday – but could not rule out it being made on Tuesday.

It comes as the Government scrambled to react to the new strain of Covid-19, which scientists fear may be more infectious and could reduce the effectiveness of vaccines.

More data is needed before either possibility can be confirmed but there is widespread alarm – and uncertainty – among scientists.

Teachers and pupils in Year 7 and above are now being ‘strongly advised’ to wear masks in communal areas outside classrooms in England, while coverings will also become compulsory again on public transport and in shops from Tuesday.

Isolation rules will return for international arrivals until they receive a negative PCR test, with 10 southern African countries added to the red list.

Close contacts of positive Omicron cases were being ordered to isolate for 10 days even if they have been vaccinated under another emergency measures announced over the weekend.

Britain will also convene an urgent meeting of G7 health ministers on Monday to discuss the variant.

Essex director of public health Dr Michael Gogarty told BBC Breakfast: ‘There are a number of sites we are looking at where these people had contact (with the infected person).

‘One you would be aware of is the KFC in Brentwood.

‘There’s also a face setting and a school setting.’

Meanwhile, Health Secretary Sajid Javid insisted that families should plan for a ‘great’ Christmas ‘as normal’, adding it was ‘nowhere near’ time to reintroduce social distancing rules and work-from-home guidance.

But Mr Javid admitted that passengers flying in from southern Africa before the new red list was confirmed were not tested on landing and they could have taken public transport to get home.

It was hoped the new measures would buy time for scientists to gain greater understanding of Omicron as ministers put the NHS on notice to deliver many more vaccines every day.

Prime Minister Boris Johnson announced the bulk of the ‘temporary and precautionary’ measures on Saturday, pledging that they would be reviewed in three weeks.

Some 17.5 million people have now had a third booster dose.