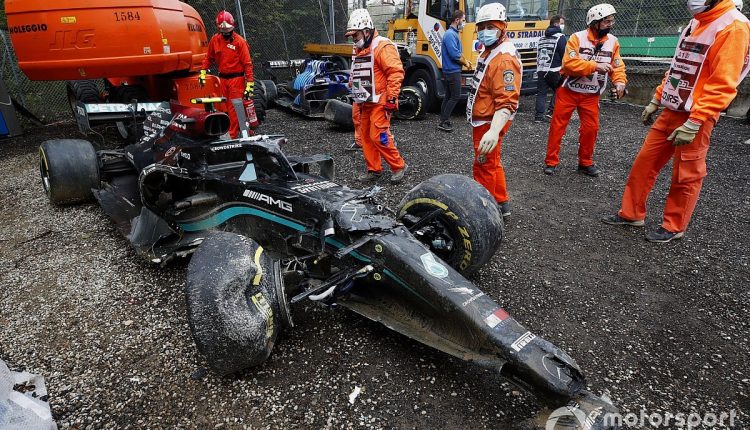 Bottas collided with Williams driver Russell while battling for ninth place in Sunday’s Emilia Romagna Grand Prix, resulting in a big crash that caused the race to be red flagged.

Bottas and Russell were quick to blame each other for causing the crash on the approach to Turn 2, but the stewards deemed it to be a racing incident.

Mercedes team boss Wolff was left to manage a collision between Bottas and Mercedes-linked junior Russell, feeling the latter had “lots to learn”.

But a more immediate issue for Mercedes is the impact the crash damage will have on its development plan for 2021 and the switch to 2022, given the expense incurred by the crash in the first year of F1’s new cost cap.

Asked by Motorsport.com how he would manage the situation, Wolff said the situation was “absolutely not amusing” for Mercedes, believing it could cost the team planned upgrades amid its battle with Red Bull.

“It’s quite a big shunt,” Wolff said. “Our car is almost a write-off in a cost-cap environment that is certainly not what we needed, and probably it’s going to limit upgrades that we’re able to do.

“And simply the fact that we ended there by losing it in the wet, because there was no contact, losing it on the wet, and making both cars crash out is not what I expect to see.

“We are very stretched on cost cap, and what we always feared is a total write-off of a car. This one is not going to be a total write-off, but almost, and that is not something we really wanted.”

Teams are limited to spend $145 million through the 2021 season under the cost cap, meaning any unexpected or unplanned crash damage costs bite harder than in previous years.

Mercedes trackside engineering director Andrew Shovlin said the team still had to complete a full analysis of the crash damage and what could be salvaged from Bottas’s car.

“It is extensive, and whether or not there’s any damage on the power unit side is one of the things that we need to check carefully,” Shovlin said. “Because he didn’t finish the race, the gearbox isn’t a concern. But the new factor for us this year is that we’re all cost capped. This sort of damage isn’t really in the plan.

“Our drivers have been incredibly good at getting through seasons without breaking much in recent years, and certainly in terms of the bill in terms of carbon work and metal work will be very extensive from that.

“So we’ll go through and look at what we can actually salvage, and get the cars back together for Portimao. But it is quite a concern when you have these sort of incidents.”

Shovlin explained how teams were working on the basis that parts would complete their anticipated life cycle before breaking.

“If you have a series of these kind of large accidents that are doing significant damage – and this has been bad for us, because we’ve had a front wing with Lewis [Hamilton] as well – then that will definitely exceed our allocation for what we have available to spend on the parts,” Shovlin said.

“In an ideal world, you run them to life, you don’t break them, anything that you do break, hopefully it’s end of life or something that is about to be obsolete. But that is definitely not the case here. So it is really a factor of the cost cap, and the money has got to come from somewhere.

“Ultimately if it becomes a big problem, it can start to hit your development budget. So we do need to be mindful of that moving forward.”