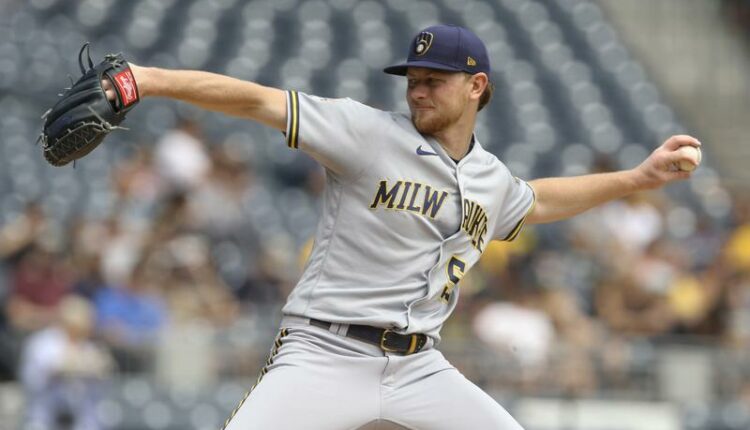 Christian Yelich doubled twice and drove in a run Sunday as the visiting Milwaukee Brewers slipped past the Pittsburgh Pirates 2-1.

Willy Adames was 1-for-3 with a walk and scored both runs for the Brewers, who scored their runs in the first and third innings and held on to win. They have won six of seven.

Milwaukee starter Eric Lauer, just reinstated from the COVID-19 injured list, pitched four innings. He gave up one run and three hits, with no walks and six strikeouts.

Brent Suter (12-5), the first of five relievers used, pitched a hitless fifth as the Brewers held Pittsburgh to four hits for the second straight game. Josh Hader struck out two in the ninth for his 23rd save.

Ben Gamel hit an RBI single for the Pirates.

Dillon Peters (0-1), starting in his team and season debut, gave up two runs (one earned) and five hits in 4 2/3 innings, with three walks and three strikeouts.

The Brewers took a 1-0 lead in the first on an unearned run. With one out, Adames singled to left and stole second. Eduardo Escobar grounded to second baseman Rodolfo Castro, who was on the third base side of second. Castro still got a throw off that was a little wide of first that might have been catchable. However, first baseman Colin Moran slipped and could not reach the ball.

In the third, Adames drew a one-out walk. After Escobar flied out, Yelich doubled to right to drive in Adames for a 2-0 Milwaukee lead.

Pittsburgh cut its deficit in half in the third. Kevin Newman led off with a double — his fifth in three games — down the line in right. Dillon’s sacrifice bunt got Newman to third. Gamel, just off the IL after a hamstring injury, hit a grounder that second baseman Kolten Wong made a diving stop on, but it was good enough for an infield base hit, allowing Newman to score and make it 2-1.