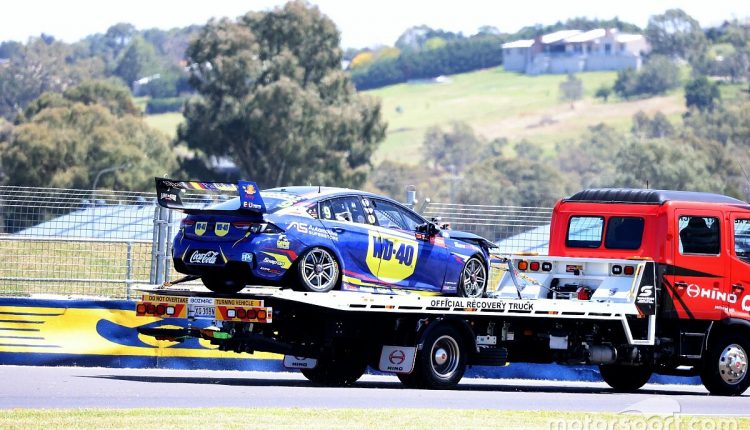 The Erebus rookie made a flying start to the hour-long session, an early lap putting him third behind Shane van Gisbergen and Chaz Mostert.

That was until he hit the wall on the exit of the dipper right any the half-hour mark, leaving his Holden with significant front-end damage.

Speaking on the telecast, Brown hinted that his weekend may be over due to the crash.

However an Erebus spokesperson confirmed to Motorsport.com that while he won’t be back on track today, a return tomorrow hasn’t been ruled out.

“It was a complete balls-up on my behalf,” explained Brown.

“I was getting a lot of understeer through there, so I tried turning in early to stop the understeer, to try and get in a bit closer. I turned in a bit too early.

“It’s really disappointing. I’m probably out for the weekend now. It sucks for the team, it sucks for everyone. We’ll keep our chin up and keep swinging on.”

Mostert ended up setting the pace in the first session, the Walkinshaw Andretti United driver coming out on top of a green tyre happy hour in the closing minutes.

His 2m05.205s left him a handy four-tenths clear of former Tickford teammate Cam Waters, while Bryce Fullwood capped off a promising start for WAU with the third quickest time.

“I don’t know who ran tyres and who didn’t,” said Mostert. “We made some changes through that session and it felt positive. The feedback of the car and the tunability is something we didn’t have last year, and it seems to be working today. We’ll see what happens in the next one.”

Van Gisbergen, who led the way for most of the session, slipped back to 12th due to the late improvements.

The best IndyCar colorschemes from McLaren and Schmidt Peterson