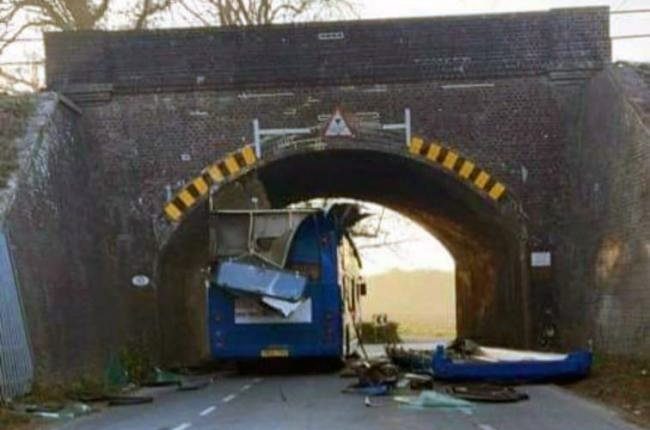 Bus smashes into bridge tearing off roof and injuring passengers

A passenger was left with a head injury after a bus driver reportedly ‘misjudged’ a bridge and drove under it.

The roof of the vehicle was ripped off around 6.40am this morning in Rocky Lane, between Haywards Heath and Burgess Hill, in Sussex.

One passenger was taken to hospital with a head injury and the driver was treated by paramedics at the scene.

A picture from the scene shows a blue double-decker bus under the railway bridge, with the roof torn off and laying beside the vehicle in the road.

Mid Sussex neighbourhood policing inspector Darren Taylor said: ‘The team, along with our fire and ambulance colleagues, have had to attend Rocky Lane this morning as a bus has misjudged the bridge and hit the bridge, damaging its top level.

‘Ambulance colleagues are attending to some passengers. Please avoid the road at his stage.’

A South East Coast Ambulance Service spokesperson said: ‘Ambulance crews have attended the scene after reports a bus had hit a bridge on Rocky Lane, Haywards Heath, at approximately 6.40am today.

‘A woman was assessed and treated at the scene before being taken to Royal Sussex County Hospital with a head injury.

‘The driver of the bus was also assessed and treated but was discharged from our care at the scene.’

A police spokesperson confirmed officers were called at 6.42am and the road remains closed in both directions.

It comes after a similar incident in September last year saw a number of children rushed to hospital in Winchester after a school double-decker bus hit a bridge and ripped off the roof.