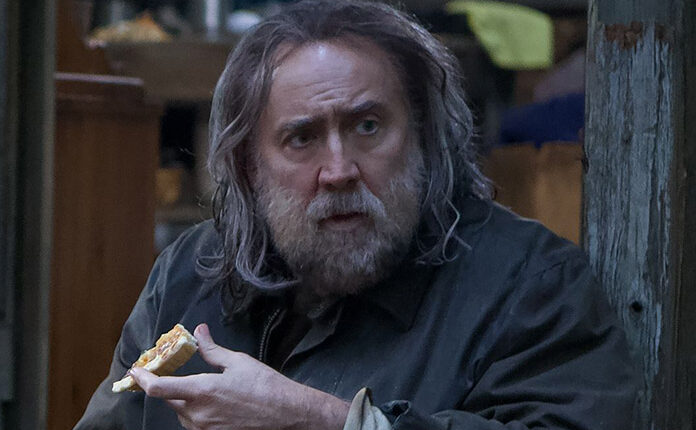 Some veteran actors big in the 1980s and 1990s have disappeared into direct-to-video obscurity these days, and for much of the 2010s it seemed as if Nicolas Cage was all set to do the same.

Then in the last three or four years, the actor has turned the narrative around thanks to some genuinely off the wall choices beginning with 2018’s double hit of “Mandy” and “Spider-Man: Into the Spider-Verse”.

While he’s still more famous for memes than movies of late, he’s sustained interest in his work again with the likes of “Colour Out of Space,” “Primal,” “Jiu-Jitsu,” and “Willy’s Wonderland” along with receiving rave reviews for his work this week in Michael Sarnoski’s “Pig”.

In an interview with Variety this week promoting “Pig,” Cage compared his quiet and reclusive truffle hunter character to his own disillusionment with Hollywood and how he has no plans to return to major studio filmmaking:

There were a lot of fun moments, but at the same time, there was also, ‘We wrote this line. It has to be said this way’. They’d put a camera on you and photograph you, and order you: ‘Now say the roller skate training wheels line.’ I’d say, ‘I’ll do that but I’d also like to try it this way.’”

Aside from voice work, Cage essentially exited studio filmmaking with “Ghost Rider: Spirit of Vengeance” in 2011 and has been in the indie realm since aside from some voice work such as ‘Spider-Verse’ and “The Croods” franchise.

He’s managed to knock out nearly thirty films in ten years, and he tells the trade he’s quite content with playing in that arena: “On independent movies, you have more freedom to experiment and be fluid. There’s less pressure and there’s more oxygen in the room.”

Cage will next be seen in the highly anticipated meta-comedy “The Unbearable Weight of Massive Talent” which sees him playing a version of himself.