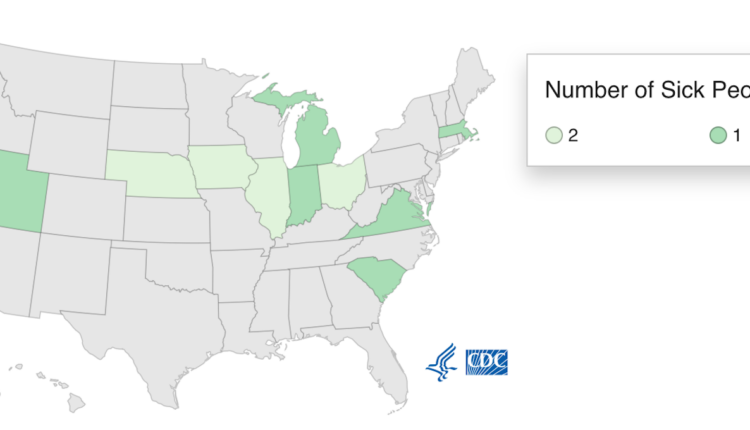 Health investigators continue to try to determine what brand of cake mixes are linked to a current E. coli O121 outbreak as they also work to find out what specific ingredients or ingredients are the sources of the contamination.

The outbreak has sickened 16 people in 12 states with 7 patients requiring hospitalization. No recalls have been initiated in relation to the outbreak.

“The true number of sick people in an outbreak is likely much higher than the number reported, and the outbreak may not be limited to the states with known illnesses. This is because many people recover without medical care and are not tested for E. coli. In addition, recent illnesses may not yet be reported as it usually takes 3 to 4 weeks to determine if a sick person is part of an outbreak,” according to the outbreak announcement from the Centers for Disease Control and Prevention.

“State and local public health officials are interviewing people about the foods they ate in the week before they got sick. Of the eight people interviewed, six (75%) reported tasting or eating raw batter made with a cake mix. People reported buying different varieties and brands of cake mix.”

The current outbreak is the second since 2018 with the contamination source being cake mix. A 2018 Salmonella outbreak sickened at least five people in three states. None of the patients required hospitalization.

In relation to the 2018 outbreak, Duncan Hines recalled four flavors of its cake mix. Health officials in Oregon identified the outbreak strain of Salmonella Agbeni in a box of Duncan Hines “Classic White Cake Mix” as part of an unrelated investigation.

The CDC compared the pathogen found in Oregon with Salmonella strains in the PulseNet database and found it matched samples collected from patients in three states.

Another cake mix recall, in 2016, was not related to any outbreaks but did involve a Duncan Hines brand mix. The recalled Duncan Hines Apple Caramel mix was distributed nationwide in Canada. The recall was initiated by the company but Canadian officials did not provide any other details about the situation.

Although neither the CDC nor the Food and Drug Administration has announced what brand of cake mix is involved in the current E. coli outbreak, or what ingredient may be the source of contamination, flour is the main ingredient in most cake mixes.

Raw flour and other ingredients can be individually contaminated and then cross-contaminate the entire mix.

Raw flour has caused two outbreaks in recent years, one in 2016 and another in 2019.

In 2016 the CDC, many states, and the FDA investigated a multistate outbreak of Shiga toxin-producing E. coli (STEC) infections. There were 63 people infected with the outbreak strains of STEC O121 or STEC O26. The patients were spread across 24 states. Seventeen of the ill people were hospitalized. One person developed the hemolytic uremic syndrome, a type of kidney failure. No deaths were reported.

Epidemiologic, laboratory, and traceback evidence indicated that flour produced at a General Mills facility in Kansas City, MO, was the likely source of this outbreak. The company recalled flour. Multiple secondary recalls occurred as a result of the investigation because they contained the implicated flour.

In 2019 the CDC reported another outbreak with a total of 21 people infected with the outbreak strain of E. coli O26. They lived in 9 states. Illnesses started on dates ranging from December 11, 2018, to May 21, 2019. Three hospitalizations and no deaths were reported.

Epidemiologic and laboratory evidence, supported by product distribution records, indicated flour was the likely source of this outbreak. Several products were recalled because they could have been contaminated with E. coli. Those products included 5-pound bags of Baker’s Corner All Purpose Flour sold at ALDI, some 5-pound bags of King Arthur Unbleached All-Purpose Flour, certain 5-pound bags of Pillsbury Best Bread Flour, and several brands of cookie and brownie mix produced by Brand Castle.

From Anxiety To Inflammation: Five Ways CBD Can Help Your Dog

Why the Pandemic Made Me Reevaluate My Bipolar Disorder…