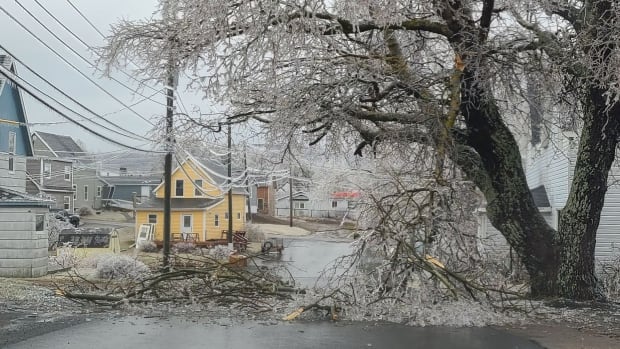 Rainfall warnings have been lifted in the province, but Les Suêtes wind warnings remain in effect for Inverness County.

With several washed-out roads and widespread power outages, Cape Breton has taken the brunt of a freezing rain storm that swept through the province Saturday night and into Sunday.

“It’s significant damage, for sure,” said Bonnie MacIsaac, deputy warden of the Municipality of the County of Inverness. “We have a lot of trees down.”

Several roads are washed out in the area from heavy rain and melting snow. MacIsaac said nine roads in the area were already in rough shape.

“Some of these were just barely made passable in the last week, and here we are set back by this,” she said.

She said she’ll be contacting the province to assess the damage and ask for emergency funding.

“All the trees froze, power lines, everything was totally frozen,” said Alyssa Basker, who lives in Inverness. “Trees were snapping off, power poles were breaking.”

Basker’s husband captured a video on his cell phone of a washed-out road. Basker said she had never seen anything like it.

“In our backyard, our tree is in pieces on the ground,” she said. “There’s some roads that were full of trees, all over the road. Even our basement flooded. We had a foot of water in it.”

Basker’s household has been without power since 9 p.m. Saturday night. She said the estimated restoration time is about 6 p.m. Sunday, but with strong winds expected throughout the evening she’s worried about further damage.

The Inverness Volunteer Fire Department opened its fire hall as a comfort centre for people to get food, a warm drink, and a chance to charge their devices.

Most of Inverness County remains without power. Nova Scotia Power’s outage map says restoration in most areas is expected by 10 p.m..

In Cape Breton County, several roads in the Sydney have been closed since Saturday evening due to flooding from heavy rain.

Around 9:30 a.m. Sunday, the Louisburg-Main-à-Dieu Rd. was washed out and is closed. The Cape Breton Regional Municipality is asking people to use alternate routes until further notice.

Rainfall warnings across the province were lifted around 3:30 p.m. on Sunday.

A Les Suêtes wind warning is in effect for Inverness County, with maximum gusts of 90 km/h expected to start weakening in the evening.

Environment Canada expected between 30-80 millimetres of rain to fall Saturday and into Sunday, which has also caused flooding in low-lying areas.

Freezing rain warnings had been in effect in parts of the province throughout the morning. They ended around 2 p.m.

Thousands of NSP customers woke up on Easter Sunday without electricity. At its peak, there were as many as 13,900 outages across the province Sunday morning.

Crews have been busy today repairing damage caused by freezing rain in parts of Cape Breton and northern Nova Scotia. We’re working safely to restore power as quickly as possible. Get the latest outage info at https://t.co/cKMppFqg0n pic.twitter.com/qFS1Lkit7x

Crews were still dealing with outages into the evening, with more than 6,500 customers still in the dark as of 5:30 p.m., according to the utility’s outage map.

Most of the outages were located along the coast of Cape Breton’s Inverness County, as well as in Antigonish and Guysborough counties.

My eating disorder is a terrible quarantine companion

‘It would give us closure’: Family struggles to get body of Windsor…

As vaccinations increase, maintaining COVID-curbing behaviour is going to get more…

New Democrats launch policy convention with a pitch to voters: we have your backs

What to expect from second GOP debate

Neighbors battle to save homes from California wildfires