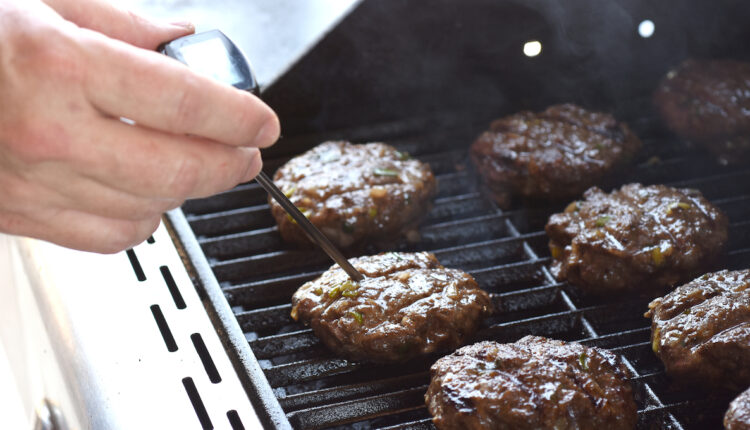 Celebrate freedom this Fourth of July, and have your burger well done

Growing up in South Carolina, Independence Day was fraught with danger. Most years we spent the holiday at my Aunt Debbie’s timeshare condo in Myrtle Beach. The condo was on a golf course, and my brothers and I spent the days scavenging balls from the ponds and dodging errant shots from our would-be customers. We rode to and from the beach without seatbelts, in the back of a station wagon, where we wouldn’t make such a mess. When the big day came, fireworks and kids combined in perilous excitement.

We also ate a lot of meat from the grill. Fortunately, no one ever became seriously ill. But we could have. One brother, in particular, took to insisting on a burger cooked “rare.” To my dismay, he still prefers his burgers cooked this way, or at least he did the last time we went out to a restaurant together.

He’s not alone. Recent survey data indicates that more than one in four adults do not adequately cook ground beef, serving hamburgers “rare,” “medium rare,” or “medium.” This leads to a lot of avoidable foodborne illness.

Ground beef is not like steak. Pathogenic bacteria — mainly E. coli and Salmonella — are prevalent in the digestive tracts of cows. As the cows are taken apart in the slaughterhouse, some of that bacteria ends up on the surface of the muscle tissues destined for human consumption. When those muscle tissues are ground up, the bacteria gets dispersed throughout. As a result, USDA recommends cooking ground beef to a much higher internal temperature than (non-mechanically tenderized) whole cuts of beef like a filet mignon or ribeye.

This all seems pretty straightforward, so why do people continue to eat rare hamburgers, and worse, publish recipes for rare hamburgers on the internet? Two rationales seem to apply. First, people fail to appreciate the risk posed by bacteria like E. coli and Salmonella. They think the “USDA Inspected” label means that the meat is sterile, or close to it, and that if they do get sick, it won’t be a big deal. Second, like the waiter in the restaurant where I ate with my brother, people think their ground beef is somehow “special,” making it impervious to pathogenic contamination.

Both of these lines of thinking have some big flaws. First, foodborne illness is a big deal. Consider E. coli O157:H7. The bacteria poses a particularly deadly risk to children under 5 years old and the elderly, with 5 percent to 10 percent of victims developing hemolytic uremic syndrome, a life threatening condition that can result in chronic illness if it does not kill you outright. Back when we went to Aunt Debbie’s beach condo, eating raw beef entailed a pretty terrific risk of getting infected with this pathogen. Fortunately, that risk is lower now, in no small part because organizations like Consumer Federation of America— with the help of advocates like Nancy Donley, whose 6-year-old son Alex died from eating E. coli contaminated meat — convinced USDA in the mid-1990s to stop letting companies knowingly sell a deadly product. But E. coli O157:H7 hasn’t gone away.

Earlier this year, USDA officials identified ground beef as the “likely source” of a multi-state outbreak. And the bacteria sickens many more people each year who are not linked to large outbreaks. States reported 2,323 E. coli O157:H7 infections in 2016, the most recent year for which CDC has posted data. In a country of 300 million, that might not seem like a lot, but keep in mind that only a tiny fraction of foodborne illness cases ever get reported, if they are diagnosed at all. Seriously, when’s the last time you provided a stool sample to your doctor? CDC estimates that beef continues to account for more than 25 percent of O157 infections each year, with leafy greens and other fresh produce accounting for the bulk of the remainder.

Side note: Why is so much fresh produce contaminated with dangerous E. coli? Cows in neighboring fields and feedlots are the most likely culprit. They really should be vaccinated, but that’s a topic for another article. This is about eating rare burgers on Fourth of July.

Don’t do it! Consider that E. coli O157:H7 is not the only E. coli that can make you sick (and kill you). There are several other “shiga toxin producing E. coli” or “STEC” variants —  like E. coli O103 and E. coli O26 — that have caused recent outbreaks linked to ground beef. Infections from these so-called “non-O157 STECs” have been rising in recent years. Why? Perhaps because federal inspectors do not test most beef products for non-O157 STECs, nor require companies to do so, even though USDA classifies them as adulterants.

And then there’s Salmonella.

Currently, USDA encourages beef processors to reduce Salmonella contamination so that no more than 5 of 53 samples collected by government inspectors test positive. But ground beef lots that test positive for Salmonella still go to grocery shelves. And thanks to a 2001 federal appellate court ruling, USDA will not take any enforcement action against a company that fails to meet the standards. Not surprisingly, a great deal of ground beef is contaminated with Salmonella — about 3.89 percent according to a 2018 USDA survey. That’s less prevalent than in chicken, but Salmonella in beef appears to sicken a disproportionate number of consumers, in part because of popular cooking practices, like eating rare hamburgers (don’t do it). According to one recent USDA estimate, beef accounts for 80,000 cases of salmonellosis each year in the United States.

Is salmonellosis really that bad? It can be, particularly if you are a young child, elderly, or otherwise immunocompromised. Each year Salmonella causes an estimated 26,500 hospitalizations in the United States, and 420 deaths. The associated medical bills alone exceed $3.7 billion, in part because of antibiotic resistance. In 2019, ground beef was linked to an outbreak of multidrug-resistant Salmonella Newport infections, which caused 255 reported illnesses and 60 hospitalizations. More generally, government surveillance has documented a growing number of Salmonella samples that are resistant to critical antibiotics like ceftriaxone and ciprofloxacin.

There are other pathogens that can make you sick in a raw hamburger too. Beef sometimes harbors Campylobacter, which is present in up to a third of chicken products, and has also been acquiring resistance to antibiotics. There’s also Clostridium perfringens, commonly found in raw meat and poultry, which causes an estimated 1 million illnesses each year. And let’s not forget the extraintestinal pathogenic E. coli, or “ExPECs,” which appear to link a significant number of antibiotic resistant urinary tract infections to contaminated meat and poultry. Do you really want to deal with any of this?

But wait, what about organic, grass-fed, locally slaughtered, or otherwise “special” ground beef? Isn’t that safe to eat rare?

I wouldn’t bet on it. Researchers have found a similar prevalence of E. coli O157:H7 on organic as compared to “conventional” beef, and a recent study revealed a significant amount of pathogenic contamination in beef purchased at farmers’ markets. There are lots of good reasons to buy organic and local products, but avoiding foodborne illness is not one of them.

So what can you do? Cook ground beef to an internal temperature of 160 degrees Fahrenheit to avoid foodborne illness. That’s pretty well done, but remember that color is not a reliable indicator. You should use a meat thermometer to be sure. If you are in a restaurant, don’t take any chances: ask for your burger well done. If you’re at home, be careful not to cross-contaminate by following the four core food safety practices.

Times change. Back when we first started going to my Aunt Debbie’s beach house, it wasn’t uncommon to play with liquid mercury, and public health authorities were just discovering E. coli O157:H7 and antibiotic resistant Salmonella. Now, we strap our kids into cars as if we’re driving in the Daytona 500, and the mere suggestion of giving an  8-year-old bottle rockets will get you excommunicated from the playdate group. It’s not that we’ve all turned neurotic. It’s that we understand the risks better, including for food. So this Fourth of July, do yourself a favor and ask for your burger well done, or better yet, have a veggie burger.