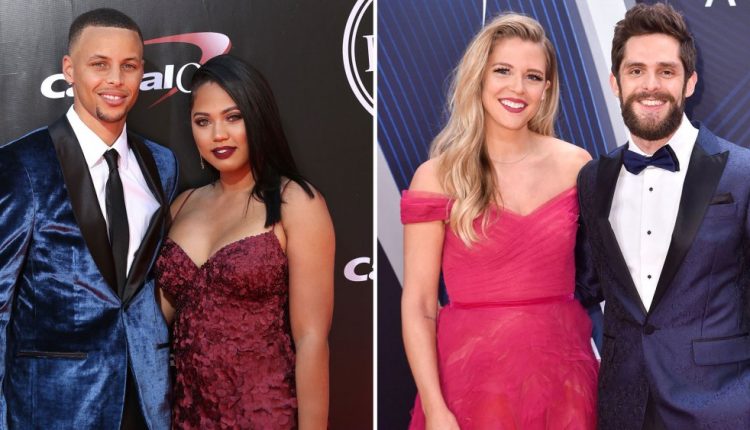 The country music star met Akins when they were in grade school in Georgia. By sixth grade, the twosome were best friends. Fast forward to high school and things turned romantic between them.

“I always got the feeling that he still liked me the way he liked me way back at church camp in the sixth grade, but I also felt like he gave mixed signals about what he wanted to do about it,” Akins wrote about their high school romance in her in 2020 memoir, Live in Love.

While their relationship hit a roadblock when they were teenagers, they got back together after college and tied the knot in October 2012.

“We dated once when we were 15, and it didn’t work out. We dated for like six months,” Rhett told Taste of Country ahead of their nuptials. “We remained best friends even after we broke up. We both dated other people for like five years. When I heard that she had ended her other relationship … I moved in for the kill. We kissed, and that was it.”

Stephen and Ayesha are another celebrity couple who bonded through their faith as teens.

“I wasn’t allowed to date in high school,” Ayesha told Parents Magazine about meeting the future NBA star when she was 14. “We always laugh that we were both focused on God.”

The athlete added, “I always had my eye on her, but I got a little shaken, for sure.”

After years as friends, the twosome started dating in their early 20s.