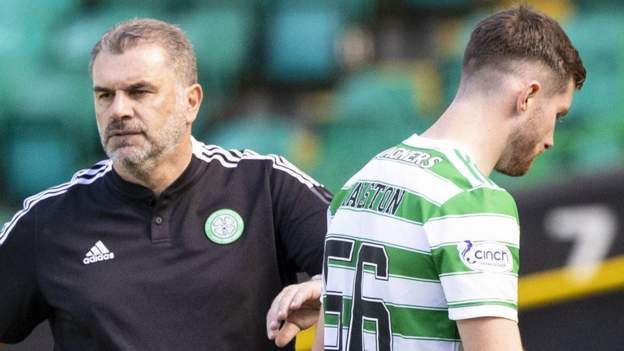 Said Benrahma scored West Ham’s fourth in their 6-2 win at Celtic ParkCeltic’s 6-2 friendly defeat by West Ham made “no difference” to manager Ange Postecoglou’s confidence as he looked ahead to the second leg of their Champions League qualifier.

Postecoglou’s men will travel to face Midtjylland on Wednesday, with the scores level at 1-1 from the first leg.

“We knew it was going to be a tough challenge going over there,” he said.

“We saw in the first leg that we played well but it was still a tight contest. It will be the same in the second leg.”

Starfelt joins Celtic from Rubin KazanCaptain Callum McGregor scored the opener for Celtic against West Ham, but Michail Antonio’s double and Mark Noble’s penalty put the Hammers 3-1 up at the break.

Christie pulled one back for the hosts only for Said Benrahma, Jarrod Bowen and former Celtic player Armstrong Oko-Flex to wrap up a comfortable win.

“This result makes no difference to my confidence ahead of Wednesday,” said Postecoglou, who oversees his first Premiership match at Hearts next Saturday.

“It was disappointing because there were some positive things in it. But there were also bits of our game that were poor. And against a good quality opponent you get punished.

“Collectively, we didn’t stick to our task in a defensive sense. We were bright going forward and showed a willingness to play our football.

“But you’ve got to match that with the other side of the game.”