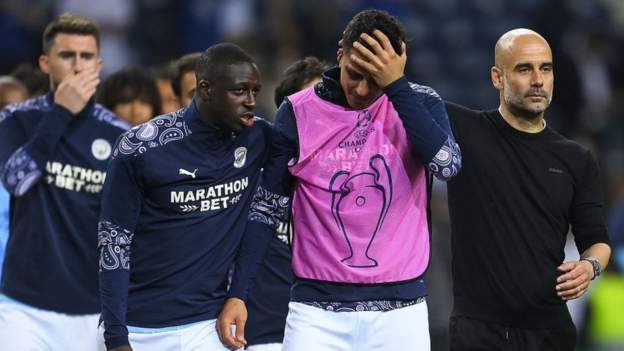 Champions League final: Did Manchester City’s Pep Guardiola tinker too much against Chelsea?

Having seen his side sweep aside many challengers both in Europe and on their way to the Premier League title, Guardiola sprung a surprise with his team selection in Porto.

He left out captain Fernandinho and fellow holding midfielder Rodri from his starting line-up and instead chose to play the more attack-minded Bernardo Silva alongside Kevin de Bruyne and Ilkay Gundogan.

The outcome was that City never really managed to get a grip on midfield throughout the game, their defence was exposed while their attack was also hampered as they finished the game on the wrong end of 1-0 defeat having managed just a single shot on target in 97 minutes.

Guardiola has been known to adjust his team selection to try and outfox his opponents.

Asked why he made the changes he did for this game, he replied: “I did the best in the selection.

“Against Lyon [in 2020] like it was against PSG, Dortmund, I tried the selection the best to win the game. The players know it, I think Ilkay Gundogan played good, we were exceptional.”

But was it the wrong decision? Or did Chelsea boss Thomas Tuchel simply have the measure of him?

How Havertz held the key for Chelsea, not just KanteChelsea beat Manchester City to win the Champions League’Kante is Makelele plus extras’ – how the players ratedHow social media reacted to Chelsea’s winDownload the 5 live Football Daily podcast”I think [tinkering too much] will be levelled at him because he changed the way he had played all season,” former Manchester United defender Rio Ferdinand said on BT Sport.

“He has always had Rodri or Fernandinho in there but he changed it. We know tactically he tinkers, he might have seen a weakness in there but Thomas Tuchel nullified any threat.

“We saw Riyad Mahrez and Raheem Sterling played really wide, they’ve not really done that this season and maybe that is something City did wrong.”

‘This might make him determined to get Harry Kane’Pep Guardiola had led Manchester City to the Champions League final for the first time in their historyFormer Chelsea striker Chris Sutton felt City players should also shoulder some of the blame for failing to put in a performance.

“Where do Manchester City go from here? This was the one Pep Guardiola wanted to win, they did not turn up on the night,” he said on BBC Radio 5 live.

“A team as talented as City, they did not work Edouard Mendy enough tonight and that will be of real frustration for them.”

However, Sutton had said prior to kick-off that not starting Fernandinho would prove to be a mistake.

“You need your leaders and Fernandinho is that,” he said.

“Roy Keane and Patrick Vieira were enforcers and he can drag their team up, you want him standing next to you in the trenches.”

For ex-Everton and West Ham midfielder Don Hutchison, the defeat highlighted just how much Manchester City need an out-and-out striker for next season.

“Pep will take a lot of criticism and I am a big fan,” he said on BBC Radio 5 live. “I don’t consider this a failure – yes, it is the big one but I hope he doesn’t come under too much criticism.

“This might sharpen Pep’s mind and he might say if I am going to win the Champions League, I need 30 goals a season, I need Harry Kane.”

‘Magician’ Tuchel trumps Pep againTo put it down to Guardiola just getting it wrong would also downplay the fact that Tuchel has not just got the better of the City boss once this season, or even twice, but three times.

Tuchel took charge of Chelsea in January but in that time he has overseen victories against Guardiola’s side in the FA Cup, Premier League and now the Champions League.

“To do what he has done coming halfway through the season is nothing short of a magician,” Ferdinand added.

“He has come into this country and played Pep Guardiola’s side three times this season and won all three.”

‘A genius but he got it wrong’ – what you saidJames in London: More often than not, football is an unexpected game, perhaps Pep thought it was too much about him this evening. This is why we all love it so much, and it’s only going to get better with the Euros in June!

Irfan: As a Bayern fan, I felt Guardiola was great for tactical excellence and discipline across the season. But something was missing in the top, top moments in Europe. It feels the same today.

Khan Karn: Pep is a genius but he got it wrong tonight, had to start with Aguero. Toothless up front. Those half-chances would have been converted by Aguero. Commiserations.

Tom Hosier: People need to start respecting Tuchel a lot more. Tactically spot on against Man City three times now! The impact he has had since coming in has been insane!

Radio 1’s Big Weekend: Tune in to hear a celebration of the biggest musicJust One Thing to improve your life: The benefits a hot bath can have on your heart and sleep