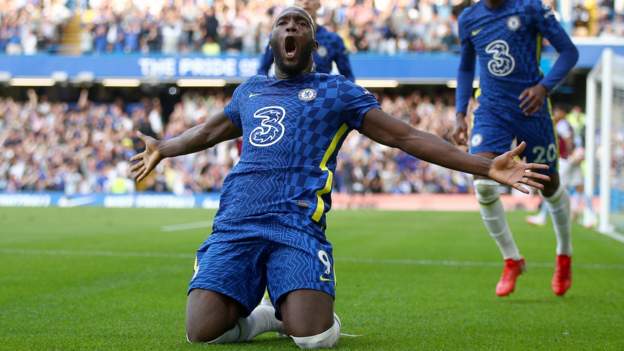 The Belgian scored his first ever goals at the stadium either side of a Mateo Kovacic strike as Thomas Tuchel’s side maintained their unbeaten start to the season.

“It’s my dream since I was 11. I’ve worked hard for this moment,” said Lukaku.

He added: “I was up and down at the start [of my career] but I’ve found a certain consistency in the last three years. With experience and hard work, I just keep on working.

“It’s a good start but we have to keep working. We know this year’s going to be very competitive. A lot of teams are going to be fighting for the title.”

Lukaku kissed the club badge as he celebrated his opener in front of Blues fans after beating Villa goalkeeper Jed Steer on his 15th appearance at Stamford Bridge overall.

The Belgian’s clinical finish through Steer’s legs came from a precise pass from Kovacic inside his own half.

Lukaku sealed the win for Chelsea in injury time with a powerful finish down from the edge of the box.

The victory takes Tuchel’s side up to second – level on points and goal difference with leaders Manchester United – and sees the club reach a significant milestone as they become only the second team in Premier League history to reach 600 wins in the competition (Man Utd have 690).

Villa made to pay for missed chancesSmith says Chelsea result was ‘unjust’ on his Villa teamVilla’s preparations for their trip to Stamford Bridge were disrupted with the absence of first-choice goalkeeper Emi Martinez and winger Emi Buendia, who missed out because of quarantine rules after the international break.

Stand-in goalkeeper Steer was in for a busy afternoon with Chelsea forcing three corners inside the opening 10 minutes, and they finally opened the scoring on the quarter-hour.

The Blues broke down the Villa defence after a superb pass from Kovacic inside his own half found Lukaku on the edge of the box.

The Belgian slalomed past Villa defender Axel Tuanzebe before sweeping past Steer for his second Premier League goal of the season.

Dean Smith’s side created plenty of chances after going 1-0 down and managed four shots on target, but could not find a way past Blues goalkeeper Edouard Mendy.

Villa enjoyed a bright spell after conceding and nearly responded when Ollie Watkins’ low drive forced Mendy into an impressive reaction save, diving low to his right to keep out the forward on his first start of the season.

Mendy was the busier of the two goalkeepers in the first half and had a let off when Watkins rounded him only to take one too many touches and allow Thiago Silva to get back and block his goal-bound effort.

Mendy redeemed himself with two saves in quick succession to deny Villa defenders Mings and Ezri Konsa, but any hopes of a comeback were dashed when Kovacic doubled Chelsea’s lead four minutes after the restart.

And they were punished for their wasted chances when Kovacic doubled Chelsea’s lead early in the second half with a first-time finish into the bottom corner from Tyrone Mings’ weak back pass.

After making the first goal, the Croatia midfielder pounced on a weak Mings pass to put the ball beyond Steer and into the far corner for only his second ever Premier League goal.

Villa managed to keep Lukaku relatively quiet, with the 28-year-old managing just 25 touches of the ball in 93 minutes – less than any player who started the game.

While he was restricted to just two chances, Lukaku scored from them both, firing into the roof of the net from Cesar Azpilicueta’s pass to make it eight goals in his last six Premier League outings against Villa.

John McGinn (Aston Villa) is shown the yellow card for a bad foul.

Jorginho (Chelsea) wins a free kick in the defensive half.

Ezri Konsa (Aston Villa) wins a free kick in the defensive half.

Attempt missed. John McGinn (Aston Villa) left footed shot from outside the box misses to the left following a corner.

Attempt blocked. Ollie Watkins (Aston Villa) header from the left side of the six yard box is blocked.

Attempt missed. Hakim Ziyech (Chelsea) left footed shot from outside the box misses to the right. Assisted by Jorginho.

Attempt saved. Ollie Watkins (Aston Villa) right footed shot from the left side of the box is saved in the top centre of the goal.