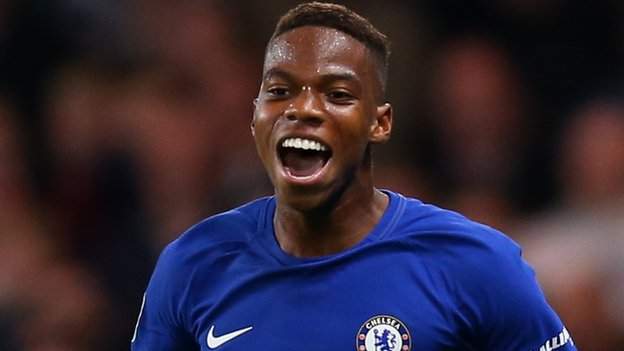 Chelsea’s Charly Musonda: ‘It’s been hard but I’m on the right track’

Charly Musonda was seen as the future of Chelsea.

His signing – at the age of 15 – was seen as a huge coup; there had been interest from Barcelona, Manchester City and Real Madrid, and one of his coaches at Anderlecht said he could be one of the top five players in the world.

But since scoring on his full debut as a 20-year-old, he has made just six more appearances for Chelsea, and only played four times in the past three years.

Here he tells BBC Sport what happened, what it was like being told he had only a 20% chance of playing again – and the extraordinary story of how a knee injury saved his father’s life.

‘It was like the World Cup final’After joining Chelsea from Anderlecht, Musonda was an integral part of teams that won the Uefa Youth League and FA Youth Cup.

To aid his development, he joined Real Betis on loan – and was named man of the match in the first of 24 appearances he made across two spells with the Spanish club.

When he returned to Chelsea, manager Antonio Conte told Musonda he would be part of the first-team squad.

And six weeks after making his Premier League debut in August 2017, he scored his first goal in an EFL Cup match against Nottingham Forest – a game he sees as his “World Cup final”.

“I remember that in cup matches, the manager would say we could stay at home, rather than in the Premier League and Champions League, when you stay in the hotel as a team,” he says.

“For me, it was like the World Cup final. I stayed at the hotel by myself. I scored and had a good game so I was very happy. It was a great moment.”

The joy, though, was short-lived.

‘I got up and couldn’t walk’In January 2018, Musonda joined Celtic on an 18-month loan, but it was cut short that summer and Chelsea loaned him to Vitesse Arnhem.

He had been at the club just a week when the incident happened that would shape the next three years of his life.

Musonda was playing in a friendly against Antwerp when a 50-50 challenge resulted in him tearing his posterior cruciate ligament.

“I knew something was wrong straight away because I got up and I couldn’t walk,” he says.

The initial diagnosis suggested Musonda would only be out for a couple of months, but when he tried to return – he managed four brief substitute appearances for Vitesse in 2019 – he was still in pain. He would ice his knee for hours between training sessions.

“The doctors said: ‘If you have a surgery now, you’re going to miss another year. It’s going to be three years of no football so it’s going to be impossible for you to come back’,” he explains.

“A PCL surgery is not common in football. It’s not like an ACL [anterior cruciate ligament] where you have surgery and in six months you can come back.

“They told me the odds of coming back were like 20%. Of coming back and being at the top level, being able to compete and play for a club like Chelsea, it was slim to none.

“It was very difficult.”

Musonda made his last first-team appearance for Chelsea in January 2018’I’m on the right track’It is now four years since Musonda was able to play back-to-back games, and he has made just four substitute appearances since that ill-fated tackle.

“It’s very difficult to have three years without being able to do what you really love,” he says. “I would be lying to say that it’s been easy, but I’ve always known that some struggles are worth going through.

“I feel like a fighter now preparing for a boxing match. It would be an incredible comeback – an incredible story. Every day is part of the journey, every day a step closer to coming back. I’m on the right track.

While Musonda’s career has stalled, several of his academy team-mates have progressed to the Chelsea first team – including Tammy Abraham, Reece James and Mason Mount.

“I know how hard it is, so I’m really proud of them,” he says. “Seeing people you’ve grown up with doing so well, you can only be happy. Hopefully I’ll be able to one day train and play with them again.”

But Musonda is honest enough to admit it has sometimes been hard to watch his former team-mates.

“In a way it has been, just because I can’t play football,” he says. “That’s the main thing, it’s not necessarily them, it’s just watching football on TV.

‘If he was on the plane, I wouldn’t be here’There is a poignancy to Musonda’s story – a talented footballer denied the chance to do the thing he loves most.

That his father – former Zambia international Charly Sr – had his career ended by a knee injury adds another layer.

In Musonda Sr’s case, though, the injury may well have saved his life.

“My dad had a qualifying game for Zambia for the 1994 World Cup,” Charly Jr says. “He was struggling with his knee but wanted to play.

“When they travelled to the game, the plane crashed and everybody died. The team, the staff, everybody.

“My dad was lucky because the owner of Anderlecht told him he shouldn’t go. My dad was furious. Two days later the plane crashed. If he was on the plane, I wouldn’t be here.”

He thinks about his father every day, and is determined his football career will have a different end.

“He’s one of the reasons I’m trying to come back,” says Charly Jr, whose Chelsea contract runs until 2022. “I don’t want my story to end on a knee injury. I want to show that my story was the same but that I came back.

“Every day, when I went to do my rehab, I thought about this. I thought about my dad and all the people who couldn’t do it. He is my inspiration. Every day I do it for him.”

Watch Charly Musonda on Football Focus on BBC One and the BBC iPlayer from 12:00 BST

The Lazarus Heist: A group of hackers cause mayhem in Hollywood for Sony Pictures Entertainment Processing grief: The Crowd Science team explores why it is a universal feeling