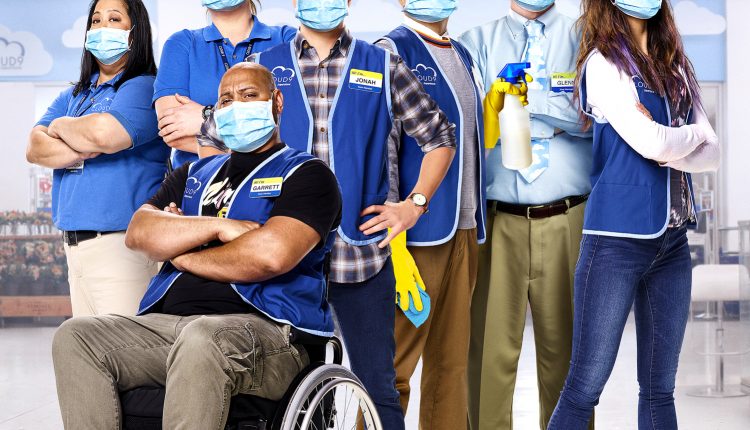 Attention, Cloud 9 shoppers! Superstore is officially closing its doors after six seasons with its series finale airing on Thursday, March 25 — and the cast is just as emotional as viewers.

“Ben [Feldman] and I text during almost anything. We were texting during the table read and I was like, ‘Are people starting to cry?’ And he’s like, ‘Well, I just did,’” Lauren Ash told Us Weekly and other reporters ahead of the NBC comedy’s finale. “And then literally at that moment, I had started to cry, and I realized I was projecting my own judgment, which wasn’t real. I had been trying to build a wall because I didn’t want to feel the emotions. But then the joke was, at the end of the day if you asked who got the most emotional, I do think it was me because I couldn’t get through the final Dina and Glenn scene. I couldn’t even get the lines out.”

For Feldman, 40, Ash and McKinney’s final scene together was what took “an ax to the floodgates” in the finale. “It destroyed me and I’m sure it will destroy other people. And then from that moment on, it’s just tears until the end,” he told Us. “It’s an emotional thing. It’s more emotional doing the table read, shooting it and watching it for us than it is for anybody else.”

Santos, 41, and Dunn, 43, would agree. “It was such a weird, surreal thing to have to go through. For five seasons we were doing the table reads together and we were able to feed off of each other’s energy and that just gets lost on a Zoom,” Santos told Us. “But we all sort of got out of our trailers after we finished the Zoom meeting, because we all did it in our trailers. And we all had a nice moment together and had a little cheers and a cry — in my case. Me and Lauren were just inconsolable.”

Dunn chimed in: “It’s a very covid thing where we have these really close, personal situations where we are sitting near our computer and talking to each other and making a connection and then all of a sudden we just hit a button and it all goes away. And now you’re just sitting. I almost think of the word penumbra, which is like when the sun meets the shadows — that point there. It was just that moment that we all felt. We end the call and it’s just quiet and by yourself and nobody is around.”

Superstore was more than just getting a peek inside the world of Cloud 9’s dysfunctional, yet lovable, employees in St. Louis. The beloved show was a true representation of a modern workplace due to its diverse characters and poignant story lines about politics, religion, the economy and more.

“We were a show that was able to make people laugh but we also didn’t shy away from these really big issues. Having one of the characters deported by ICE, talking about maternity leave. Some of these subjects I’ve never seen on a network comedy,” Sakura, 31, explained. “I feel like we are super groundbreaking in that way. A lot of the response that I see — especially in this pandemic — is so many people think of us as a really uplifting show. So, it’s cool that we can achieve that balance of being uplifting and still not shying away from serious topics.”

Ash, 38, shared the same sentiment. She hopes that “people will look back on the show and be like, ‘Wow, look how they were talking about health care. There was a reference to abortion in an episode.’ How they were dealing with all of these social issues on a network television show. I think that will be the takeaway for years and years,” she told Us. “That’s being proven because people are just finding it now and stuff that was relevant that we were doing six years ago people are totally embracing and excited about it now so to me that proves that with that kind of capsule feeling that stuff — while timely — also ends up evergreen.”

Feldman also looks at the series as “a time capsule for a typical time in American History.”

“People can watch it 10, 20, 30 years later and get some kind of a semblance of an idea what we were kind of going through culturally in America for the working class primarily at this time,” he said. “And that’s something that I’m really proud of.”

Stars Reveal What They Took From Film and TV Sets

Referring to The Office and Parks and Recreation, he later quipped: “And other NBC comedies have sort of done that as well, but we did that without ever directly looking in the camera.”