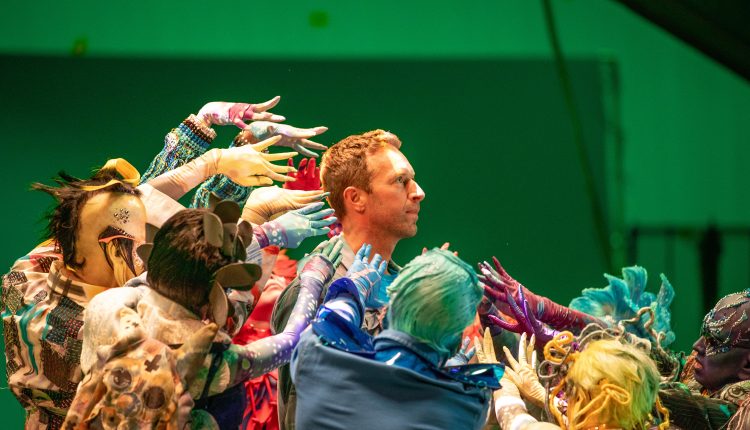 Coldplay have discovered that, perhaps, aliens do have more fun judging by the scenes in their Higher Power music video.

The band made their comeback last month with the release of their new single, which was played for the first time in space on the International Space Station.

Dave Meyers directed the music video, which sees the band exploring a colourful trash planet named Kaotica, whose alien language, Kaotican, features in the video and across the Higher Power artwork.

Kaotica is populated by robot dogs, giant holograms and a street-gang of dancing aliens, performed by Seoul’s Ambiguous Dance Company.

Meyers said: ‘The video is a metaphor for how, right now, we all feel alienated, far removed from our world, almost like we’re on an alien planet. And ultimately we find love in the streets and that euphoria shoots us off into the stratosphere of our own energy and higher power.’

In behind the scenes photos, frontman Chris Martin has encountered extraterrestrial life and had an absolute blast.

Filming against green screen for the intergalactic visuals, the musician is seen surrounded by dancers in weird and wonderful costumes that honestly wouldn’t look out of place on The Masked Dancer.

Before long, they’re all dancing around together with Chris as the ringleader.

Higher Power is produced by Swedish songwriter and producer Max Martin and the music video sees the band performing the song in front of shipping containers with hologram aliens dancing in front of them.

The musicians previously joked that the track had ‘arrived on a little keyboard and a bathroom sink at the start of 2020’.

Coldplay, also consisting of Will Champion, Guy Berryman and Jonny Buckland, enlisted the help of French astronaut Thomas Pesquet for an out of this world stunt, which saw the track being played on the ISS before being beamed back to Earth via satellite, or, ‘extraterrestrial transmission’ as Pesquet called it.

Of course, the band weren’t able to travel on the ISS themselves but they did get a tour of the spacecraft via video link courtesy of aerospace engineer Pesquet.

In an interview with the astronaut, Chris said: ‘Right now we aren’t able to play for anybody on Earth, so we thought we’d just play for you. It’s like our one-man concert.’

Coldplay then performed the track on the River Thames to open the Brit Awards 2021 because, clearly, they don’t do things by halves.

Higher Power will presumably appear on Coldplay’s next album, although they’re yet to announce the details.


MORE : Coldplay’s Chris Martin is a man of taste as he celebrates BTS and Eurovision’s James Newman