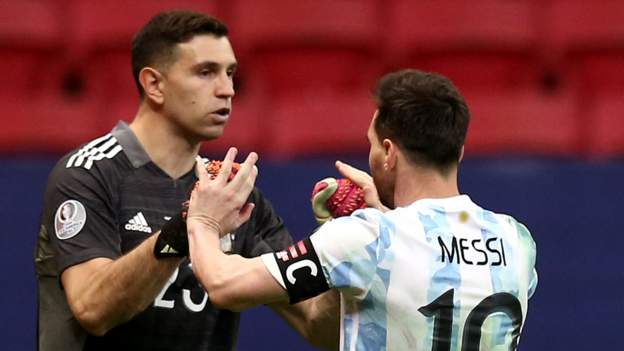 Copa America 2021: Argentina get past Colombia on penalties to set up final against Brazil

The Aston Villa keeper denied Davinson Sanchez, Yerry Mina and Edwin Cardona from the spot after the game ended 1-1.

Lionel Messi set up Lautaro Martinez to put Argentina ahead before Luis Diaz levelled to send the game to penalties.

Messi, Lautaro Martinez and Leandro Paredes all scored their penalties in the shootout, but Emiliano Martinez was the hero as he produced a hat-trick of diving saves after being rarely troubled during the game.

The 28-year-old, who moved to English football with Arsenal and had loan spells at Rotherham, Oxford, Reading, Sheffield Wednesday and Wolves, also earned a talking to from the referee for his ceaseless chat aimed at Colombia’s players as they lined up to take their kicks.

“They took us to penalties and that’s a question of luck, today it was my turn for glory,” he said. “I’m speechless.”

Six-time Ballon d’Or winner Messi, who is looking to win his first senior trophy with Argentina, praised the Villa keeper for ensuring they “fulfilled our objective” of reaching the final.

“It was difficult at times,” Messi said. “But we have ‘Emi’ and he’s phenomenal. We trusted him.”

Argentina, who won the last of their 14 Copa America titles in 1993, face defending champions Brazil at the Maracana on Saturday.

Brazil, who have won the Copa America nine times – and on all five of the previous occasions they have hosted the tournament – beat Peru 1-0 in the other semi-final on Tuesday.

Goal! Argentina 1(2), Colombia 1(2). Miguel Borja (Colombia) converts the penalty with a right footed shot to the high centre of the goal.

Nicolás Otamendi (Argentina) wins a free kick in the defensive half.

Germán Pezzella (Argentina) is shown the yellow card for a bad foul.

Luis Díaz (Colombia) wins a free kick in the attacking half.

Euro 2020: England manager Gareth Southgate says he is only focused on semi-final against Denmark