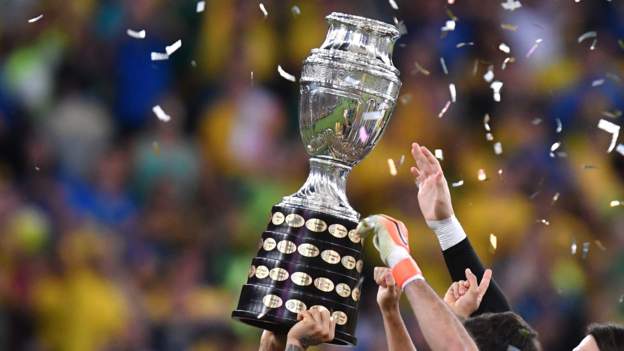 Copa America: Tournament to be hosted by Brazil after Argentina removed

Brazil won the tournament in 2019, their ninth Copa America trophyHost: Brazil Dates: 13 June-11 JulyCoverage: Every match live on BBC Red Button, BBC iPlayer and the BBC Sport website and app. The 2021 Copa America will be hosted by Brazil, after Argentina was stripped of the tournament just two weeks before it starts.

The South American Football Confederation (Conmebol) said Argentina was removed as host because of the “present circumstances”.

The country is currently experiencing a surge in Covid-19 cases.

Later on Monday, Conmebol confirmed Brazil would host the showpiece event, which starts on 13 June.

“Conmebol thanks the president @jairbolsonaro and his team, as well as the Brazilian Football Confederation for opening the doors of that country to what is today the safest sporting event in the world. South America will shine in Brazil with all its stars!” Conmebol said on Twitter.external-link

But Mr Bolsonaro’s chief of staff warned that there is “no done deal yet” and tough conditions would have to be met.

“We are in the middle of the process (of negotiations). But, we will not shy away from a demand that, if it’s possible to be done, it could be done,” Luiz Ramos said.

It is not known which stadiums would host the tournament if it goes ahead.

Argentina was originally set to co-host with Colombia, who were removed on 20 May with wide-spread protests sweeping the country.

Opposition to the tournament had grown both inside and outside Argentina’s government, while Uruguay striker Luis Suarez told reporters on Friday that priority had to be given “to the health of human beings”.

On 22 May Argentina went into a new nine-day lockdown after seeing 35,000 new cases each day that week.

Meanwhile, in Brazil, protests over the management of the Covid-19 pandemic by the government of President Jair Bolsonaro took place on Saturday.

Brazil has registered nearly 460,000 deaths – the second-highest toll in the world after the United States. It also has the third-highest number of recorded coronavirus cases at more than 16 million.

Brazil’s Senate is holding an inquiry into the Bolsonaro government’s handling of the pandemic and the slow roll-out of the vaccine programme.

Brazil are defending champions, having won the tournament in 2019.

Every game at the Copa America will be shown live on the BBC.

“Bizarre” and “out of touch”. That’s how Brazilians have labelled Conmebol’s surprise decision to move the Copa America to a country which continues to be a hotspot in the pandemic, with an average of 2,000 deaths a day. Even if the matches end up being played behind closed doors.

When you take into account that the previous host, Argentina, was removed because of its struggle to contain the virus, the move becomes even harder to explain.

Brazilian cities are experiencing an upsurge in infections as restrictions are lifted and many people continue to ignore advice to socially distance and wear masks.

It is all about money. Cancelling the event, which many say would have been the most sensible decision, would have resulted in huge losses for the organisers.

And it is also about Brazil’s president who, it seems, gave his backing to the country becoming a last-minute host.

Jair Bolsonaro opposes lockdowns, face masks and, some months back, even raised doubts about the vaccine.

He has been accused of doing very little to control the virus, so some commentators have argued that agreeing to host a massive sporting event as the pandemic rages on is very much in the Bolsonaro style.

“I also faced the ugly side of football”: Mark Walters looks back at a pioneer of race in the gameDefying gravity with Lily Rice: The first person ever to land a wheelchair backflip