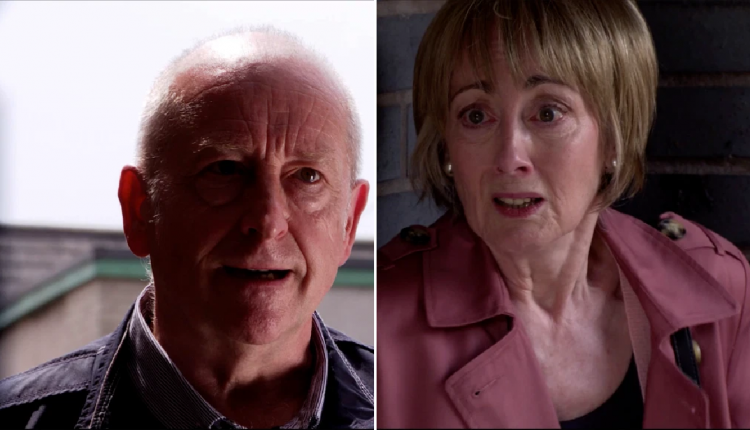 Geoff Metcalfe (Ian Bartholomew) is at his worst when the control is slipping from his fingers and the arrival and revelations of Elaine (Paula Wilcox) – the mum of Tim (Joe Duttine) who Geoff had always claimed to be dead – could be his downfall in Coronation Street.

But as Elaine makes her accusations of abuse and a life of hell at the hands of Geoff and even Tim starts to doubt his dad, Geoff realises that he needs to take action and he strikes in a showdown before Elaine then disappears.

What has he done to her? Has he resorted to murder in order to silence her?

Sally (Sally Dynevor) implores Tim to accept that Elaine could well be telling the truth and that Geoff has fed him a pack of lies all his life.  Tim refuses to listen but it’s clear her words have hit home. Alya Nazir (Sair Khan) is worried something has happened to Elaine and she reports her missing to the police.

Faye Windass (Ellie Leach) asks Geoff who he was arguing with in the ginnel Goeff continues to insist she is a mad woman and he has no idea who she is, insisting to police his first wife is dead. Sally insists he tells the truth.

This comes after Sally urges Elaine not to give up on Tim as one day he’ll understand. As Elaine heads to Street Cars looking for Tim, she’s horrified when Geoff approaches. But how far has the monster gone this time?

With all eyes on him, Geoff swears that Elaine is peddling lies, she’s not Tim’s Mum and Alya must have put her up to it in a bid to drive a wedge between them. Sally begs Tim to open his eyes and see Geoff for the abusive bully that he is but Tim’s angry and warns her not to make him choose between her and his dad.

When Geoff tries to enter the restaurant, Alya bars his way and threatens him with her broom. Geoff admits to Tim that he did confront Elaine, but only to tell her to stay away from his family and peddle her lies elsewhere. Tim rips up Elaine’s phone number and tosses it in the bin, telling Sally he’s had enough of her suspicions.

But did Geoff do more than threaten Elaine? Or will she return to finally expose him?