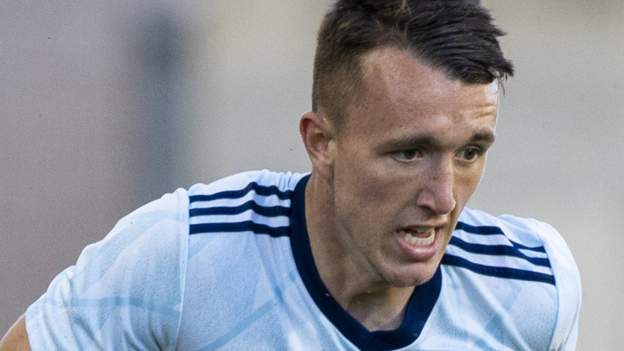 Celtic’s David Turnbull (right) gained his first Scotland cap in the 2-2 friendly draw with the Netherlands on WednesdayWhen David Turnbull’s proposed transfer from Motherwell to Celtic broke down in the summer of 2019, after the diagnosis of a rare knee condition, the 21-year-old questioned whether he would play again.

Preventative surgery was required, along with almost a year’s worth of rehabilitation, before a move to the Parkhead club was eventually completed last August.

Less than two years on from the collapse of Celtic’s initial pursuit, Turnbull has sparked his young career back into life after being one of the club’s only shining lights in a dim and miserable season, earning himself a place in Steve Clarke’s Euro 2020 squad in the process.

“It’s been a crazy year or two since then. This probably tops it all off.”

‘My fingers were crossed for it’In Turnbull’s darkest days, he always had his family to turn to for support.

His mother, father and brother have all been on hand to guide him through the crushing low he was dealt in June 2019, making it all the more fitting that he was in their company as they waited for the message to confirm his place on Clarke’s 26-man list.

“I had my fingers crossed for it,” Turnbull says. “But obviously you need to take into consideration the players you’re up against.

“All my family were sitting in the living room when I got the text. I was absolutely delighted and so were they. My mum gave me a big cuddle and a kiss. My brother and my dad were a bit reserved, they tried to keep calm and I was the same.”

Turnbull (left) scored nine goals for Celtic last term in his first season at the club’Playing for your country, there’s nothing better’It is now just over three years since Turnbull’s first competitive start – which came against Partick Thistle back in May 2018 – but the Motherwell academy graduate didn’t fully establish himself in Stephen Robinson’s side until midway through the following season.

He has gone on to have a hand in 40 goals in just 76 appearances – 25 goals and 15 assists – a hugely impressive return for any midfielder, never mind one so young.

“Personally, I’ve been in very good form,” Turnbull says. “There have been some games we’ve [Celtic] struggled in, but I feel I’ve contributed well.

“Other games I’ve scored plenty of goals and made plenty of assists. That’s what I want to try add to this squad. Every game I play I’ll try do my best for the team.

“I’m always ready. Whether I’m picked or not, if I come on as a substitute or whatever, I’ll be raring to go. Playing for your country, there’s nothing better than that.”

‘How times have changed’Turnbull was handed his first cap by Clarke in last week’s 2-2 draw with the Netherlands, becoming the first Scot born after the 1998 World Cup – Scotland’s last major finals – to make a senior appearance for the national side.

“I remember when I was younger watching with my dad, my brother and my mum,” Turnbull recalls. “Always wanting them to do well and win.

“There was always a last-minute goal or something that knocked us out of qualifying. It was always heartbreak at those moments. How times have changed.”