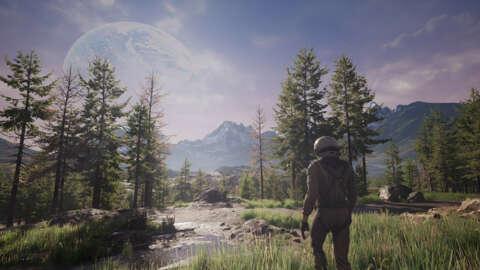 Icarus is an upcoming survival game from DayZ creator Dean Hall’s Rocketwerkz studio. The sci-fi game is set on the titular planet Icarus, where a plan to terraform a “second Earth” went horribly wrong. Now, an extensive trailer from Rocketwerks takes the form of an in-universe documentary, explaining more about the Icarus project, and what went wrong in the early days of the project.

The trailer mixes live action with game footage–and due to Rocketwerks being headquartered in New Zealand, you’ll hear a few Kiwi accents in its seven-minute runtime. The documentary is titled Icarus: No Rescue, and while the live action segments may not filter through to the actual gameplay, it’s a novel way to introduce the game’s concept.

When players get stuck into Icarus, it’ll play like any other survival game, but with one big difference. Icarus is a session-based survival game, meaning players will be dropped onto the planet for specific missions with variable lengths, sent to gather resources and to stay alive until extraction occurs.

Rocketwerkz describes the game as “Player vs Environment,” with up to eight players able to work co-operatively against the hostile planet. The game will be constantly added to, with new chapters planned post-release that will add new content and lore.

Check out GameSpot’s Icarus hands-on for more about how the game plays, as well as an interview with creator Dean Hall on what went into developing the concept. Rocketwerkz hasn’t announced a release window for the game yet, but the studio will be showing off Icarus’s gameplay for the first time at 8 PM EDT on April 8 on their Twitch channel.